Apacer, a DRAM manufacturer, has released a chart which appears to confirm that AMD's Ryzen 7000 series processors will no support DDR4 memory. Some PC builders were hoping that AMD would support both DDR4 and DDR5 memory with their next-generation processors, due to the premium pricing of today's DDR5 memory modules. This does not appear to be the case.

AMD's native support for faster DDR5 memory speeds implies that AMD has a lot of faith in their Ryzen 7000 DDR5 memory controller and its performance credentials. That said, it remains to be seen how AMD's next-generation Ryzen processors will handle high-performance DDR5 memory modules. 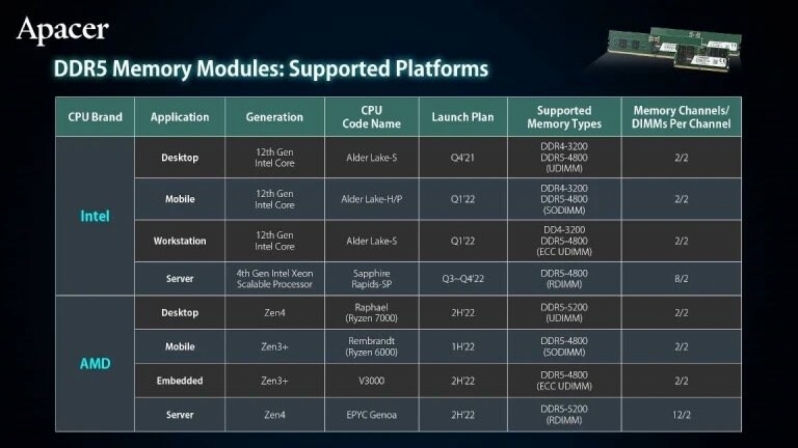 Why is AMD ditching DDR4 support with AM4?

As mentioned before, AM5 represents a fresh start for AMD. AM5 will allow AMD to abandon many of the legacy trappings of their aging AM4 ecosystem, making their new platform easier to support long-term. What AMD doesn't need with AM5 is needless complexity, as AMD does not plan to abandon their AM5 platform after one or two product generations.

Intel is supporting both DDR4 and DDR5 memory with their LGA1700 CPU socket, and it is safe to assume that Intel will probably be moving to a new CPU socket after the release of their 13th generation Raptor Lake processors. Intel rarely supports a CPU socket for more than two product generations, and it is probable that Intel's post LGA1700 socket will not support DDR4 memory. In this case, Intel can support both memory types on a temporary basis, and are willing to spend the time and effort to support DDR4 and DDR5 on their CPU silicon and on their motherboard platforms.

Assuming that AM5 will be supported as long as AM4, AMD cannot afford to lock-in DDR4 and DDR5 support at this early stage. Doing so would force AMD to support DDR4 on their processors and motherboards for years to come, long after there would be any advantages to do so. While DDR4 memory is currently more cost effective, in time, DDR5 will become more affordable, and DDR5's performance advantages will be better exploited by hardware and software.

You can join the discussion on Apacer's confirmation that AMD's Zen 4 processors will not support DDR4 memory on the OC3D Forums.