With these modules, Corsair has promised to deliver frequencies up to 3600MHz, with optimised compatibility with the latest AMD Ryzen and Intel Core processors. These new DIMMs also ship with an updated heatsink design which delivers efficient heat dispersion without the need for active cooling.

To ensure stable performance, Corsair has claimed that the memory used within these modules are "tightly screened". Sadly, Corsair hasn't released a detailed list of the speeds and timings that these new kits will offer, so we cannot compare the specifications of these new modules to competing products at this time.

With 44mm module highest, Corsair has ensured that their Vengeance PRO RGB DIMMs will be usable with their A500 CPU cooler and offer improved compatibility with other large heatsinks.

The RGB lighting on these DDR4 modules can be controlled through Corsair's iCUE software, which allows users to create custom lighting profiles for their DRAM and other Corsair RGB products.

CORSAIR, a world leader in PC gaming peripherals and enthusiast components, today announced a new range of high-performance DDR4 memory kits to its renowned VENGEANCE RGB PRO lineup, CORSAIR VENGEANCE RGB PRO SL. Initially available in a wide range of frequencies up to 3,600MHz and kits up to 128GB (4x32GB) in both black and white, VENGEANCE RGB PRO SL boasts dynamic ten-zone RGB lighting in a form-factor just 44mm tall, offering wide compatibility with nearly any PC build. Each module is tightly screened and optimized for peak performance and overclocking potential, for memory that matches its mesmerizing visuals with equally impressive performance.

At 44mm tall, VENGEANCE RGB PRO SL's compact form-factor enables compatibility with a multitude of CPU cooler options, including dual-fan AIO liquid CPU coolers and many air coolers such as the CORSAIR A500. Ten individually addressable RGB LEDs per module are massively customizable through CORSAIR iCUE software, and can be synchronized with all iCUE-compatible devices throughout your setup for stunning lighting effects across the entire iCUE ecosystem.

VENGEANCE RGB PRO SL continues the legacy of high-frequency performance and reliability synonymous with CORSAIR memory. Optimized for compatibility with the latest AMD and Intel DDR4 motherboards, VENGEANCE RGB PRO SL utilizes a custom PCB for high signal quality and stability. Each memory chip is carefully screened and selected for high performance and overclocking potential, while the stylized aluminum heatspreader efficiently disperses heat during even the most strenuous tasks, so you can get the most out of your memory. With completely customizable RGB lighting and outstanding performance contained in a form-factor that's more compact than ever before, VENGEANCE RGB PRO SL is memory that mesmerizes.

You can join the discussion on Corsair's Vengeance RGB PRO SL series DDR4 memory modules on the OC3D Forums. 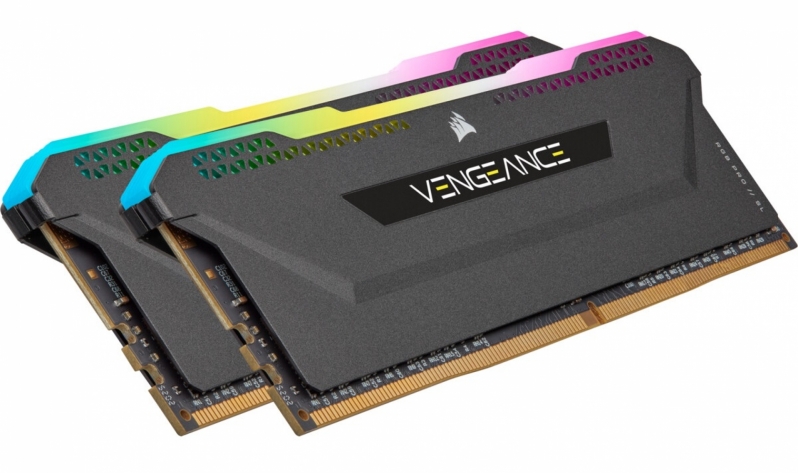 Dicehunter
I'd love some memory akin to their Vengeance LPX memory but with an updated look, No RGB and smooth metal housing all around, Make it look very professional.Quote

Warchild
Quote:
Thats why I like my hyper X predator. They are showing their age now though.

Dicehunter
Quote:
My favourite looking stuff is this, Nice and squared off, No gamery lines, Nice and symmetrical, Just wish it came in a non RGB variant and no branding of any kind, I know I can just turn off the lights but no RGB would also lower the price.