DDR5 memory pricing has dropped by 20% over the past month

If more of the PC market will simply ignore DDR5 and opt to use DDR4 memory with Alder Lake, why invest in delivering larger quantities of DDR5 memory in an earlier timeframe.

A new analysis of the DDR5 DRAM market from Computerbase.de has uncovered that DDR5 memory pricing has fallen dramatically over the past month. Over the past four weeks, the publication found that the pricing of an entry-level DDR5 memory kit had fallen by over 20%. Further pricing reductions are expected over the next few months, and that will make the prospect of a DDR5-only CPU platform viable.

With the release of Intel's 13th Generation Raptor Lake and AMD's Ryzen 7000 series, DDR5 memory will be cheaper and more commonly available, and that will allow DDR5 to finally supplant DDR4. 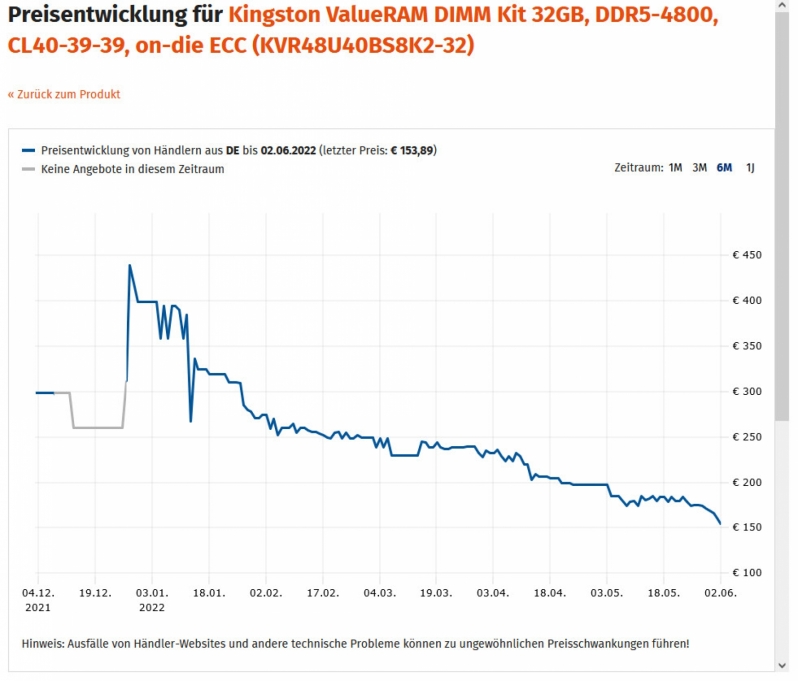 (Chart and Data via Computerbase.de)

Why DDR5 will replace DDR4

As CPU manufacturers move to more broadly support DDR5 memory, CPU memory controllers should also improve to make better use of the new memory type. Faster DRAM controllers can have a huge impact on memory performance, and we expect to see faster memory controllers as DDR5 adoption increases.

You can join the discussion on DDR5's falling value on the OC3D Forums.

g0ggles1994
But how long will it last for? Especially as enterprise/datacenter platforms start utilising it.Quote
Reply