ECC! ECC for everyone! SK Hynix spills the beans on its DDR5 DRAM tech

DDR5 is going to be a lot faster than DDR4.

ECC! ECC for everyone! SK Hynix spills the beans on its DDR5 DRAM tech

The memory industry is prepping for its next big transition, and SK Hynix is ready. DRR5 memory is coming, and the fabs of SK Hynix plans to enter mass production this year.

SK Hynix was the first memory producer to create JEDEC compliant DDR5 memory modules, and it's only a matter of time before this technology becomes the industry standard within the memory market. It's faster, more efficient, and integrates error correction support, making DDR5 memory a huge upgrade for consumers and enterprise users alike.

Capacity-wise, DDR5 will offer minimum densities of 8Gb, which is over four times larger than what DDR4 provides. The same applies to DDR5's maximum capacities, which will extend to 64Gb.

Unlike DDR4, ECC (Error Correcting Code) and error check and scrub (ECS) are part of the DDR5 standard. No longer will these features be limited to specialised processors and memory modules. This change will make DDR5-based systems more stable and reduce the cost of ECC enabled systems tremendously.

Power-wise, DDR5 memory will run at an operating voltage of 1.1V, which is much lower than DDR4's 1.2V. DDR5 aims to reduce power consumption per unit of bandwidth by more than 20% when compared to DDR4. 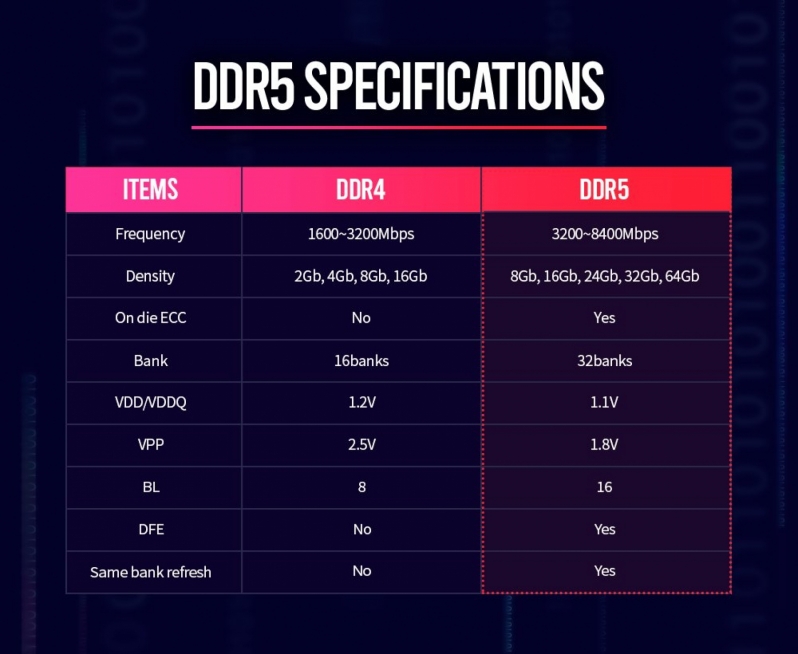 DDR5 support is due to be added to future processors from both Intel and AMD, likely as part of their late 2021 or early 2022 product lineups. DDR5 memory is also expected to be used widely for 5G networks, autonomous vehicles, AI applications and both home/enterprise computer systems.

Based on AMD's current hardware roadmap, we expect AMD to deliver DDR5 memory support with Zen 4, assuming that the market is ready to move away from DDR4 memory modules. This change will require new consumer and enterprise motherboards, thanks to DDR5's new features, specifications and form factor. 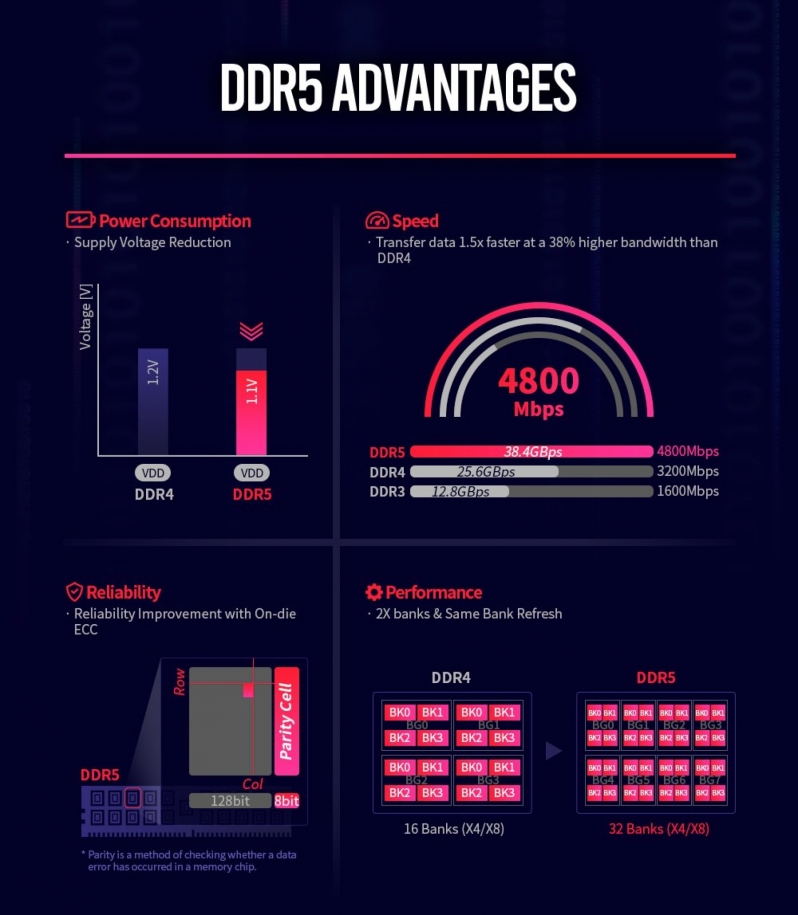 While today's 3200MHz DDR4 memory may seem fast today, it is worth remembering that datasets are only getting larger and that applications are already starting to get bandwidth constrained. There's a reason 3200MHz memory is now the norm amongst gamers, and not the 2400MHz DIMMs of yesteryear.

DRAM speeds are fast enough until they aren't. You won't see the benefits of increased bandwidth until you hit the limits of what you already have, and with CPU core counts continuing to increase, faster memory technology is quickly becoming a must for both the consumer and enterprise PC markets.

You can join the discussion on SK Hynix's DDR5 memory technology on the OC3D Forums.

NeverBackDown
Damn this is quite an upgrade. My next system will be based off ddr5, I personally feel like it's only worth upgrading every new memory standard for a worthwhile investment. Until then I'll just rock my 8700k.Quote

TheF34RChannel
Ooooeeee I like that! It's better to have ECC and not need, than to need and not have. The top speeds are no slouch either.Quote

Avet
Workstations will just take off. Until DDR5 whenever you need ECC memory you are limited to low speeds. Now you will have n-core monsters that just munch through data.Quote

Peace Đ
Guess I'll have to upgrade then as well... My 1600MHz DDR3 and 4770k are still doing their work though :<Quote
Reply