Coinciding with the launch of AMD's Ryzen 3rd Generation processors, G.Skill has released their Trident Z Neo series of DDR4 memory DIMMs, which are designed with X570 in mind with speeds of up to 3600MHz and tight CL14 timings.

Each DIMM comes with a 10-layer PCB and can ship in kits of up to 64GB (4x16GB DIMMs). Each kit comes pre-tested on an ASUS Crosshair VIII Formula motherboard with an AMD Ryzen 5 3600 processor.

The table below notes the capacities and specifications that are offered by G.Skill's latest DDR4 DIMMs, which can feature timings as tight at 14-15-15-35 at 3600MHz in 2x 8GB and 4x8GB kits.

Each DIMM is designed to offer a bold contrast between black brushed aluminium and powder coated silver to deliver an impactful look. 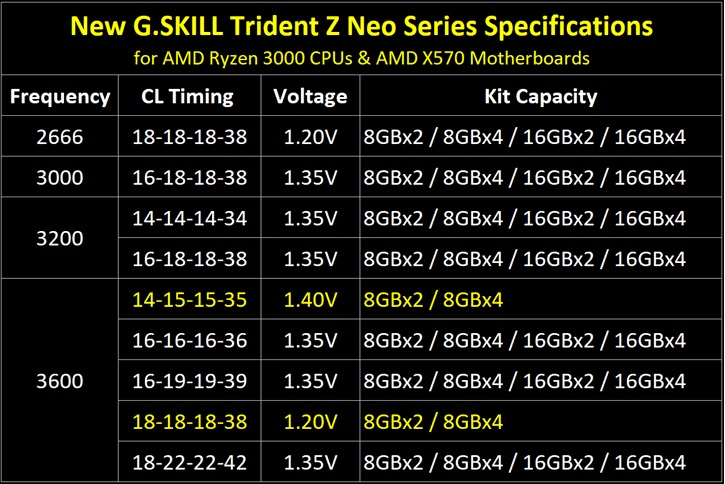 Our review of AMD's Ryzen 3rd Generation 3700X and 3900X processors is available to read here.

You can join the discussion on G.Skill's Ryzen-optimised Trident Z Neo series of DDR4 memory kits on the OC3D Forums.

NeverBackDown
Still prefer the Royal line up. If I am gonna go RGB I may as well get the best looking one.

These are still nice looking though. The only difference I can see is it's no longer all black but now with a silver section. Probably prefer all black.Quote


is the performance increase really worth 140euro?
i really doubt it.


would most people not be better off putting that money elsewhere?
(better GPU, better CPU etc).Quote

Excalabur50
I actually sent GSkill an email asking for something just like this last week although I mentioned 3200 with better timings as I noticed that RGB ram generally has rubbish timings, so I guess they must have heard similar things before and made these, well done GSkill well done!Quote

looz
Nice, looks like b-die getting discontinued wasn't the end of the world!Quote

RobM
1.4 volts? I thought 1.35 was the norm for daily useQuote
Reply