Who's looking forward to having 128GB DIMMs?

Innodisk expects early DDR5 memory adoption to start in Q4 2021, around the same time as Intel's planned Alder Lake CPU launch. DDR5 is expected to grow in popularity in 2022 and 2023, eventually supplanting DDR4 as the world's most popular DDR memory standard.

What follows is Innodisk's Press Release.

Innodisk has officially announced the release of its industrial-grade DDR5 DRAM modules. The new standard touts a host of crucial performance improvements and power savings over its predecessor, and anticipation has been high since the official announcement of the standard. Boasting a bucketload of benefits, including the obligatory speed and storage increases, DDR5 will eventually take its place as the memory option of choice.

The JESD79-5 DDR5 SDRAM specification signalled the transition to DDR5, with significant improvements in capacity, speed, voltage, and ECC functions. The DDR5 specification details up to four times as much capacity per IC, raising the maximum achievable per die capacity to 64Gb and bringing the maximum potential capacity for a single DDR5 DIMM to 128GB.

DDR5 also has a theoretical maximum transfer speed of 6400MT/s, doubling the rate of DDR4. Meanwhile, the voltage has been dropped from 1.2V to 1.1V, reducing overall power consumption. A further major structural change is power management is moved onto the DIMM, reducing redundant power management circuitry on the motherboard for unused DIMM slots.

Less than a year since the DDR5 specification release, early adoption should happen by Q4. "Our customers are excited about the potential DDR5 has to invigorate their application developments," said Samson Chang, Corporate VP & GM of global embedded and server DRAM business unit, at Innodisk. He added that "Innodisk brings quality products to the industry by introducing new DDR5 DIMMs with original ICs, anti-sulfuration, heat spreader, and conformal coating technologies with industrial-grade reliability they've come to expect from us."

Hyperscalers are the likely early adopters, but in the long term, most industries should feel the benefits of DDR5 in 5G, deep learning, AI, edge computing, smart medical, supercomputing, and mission-critical applications.

You can join the discussion on Innodisk's Industrial DDR5 memory on the OC3D Forums. 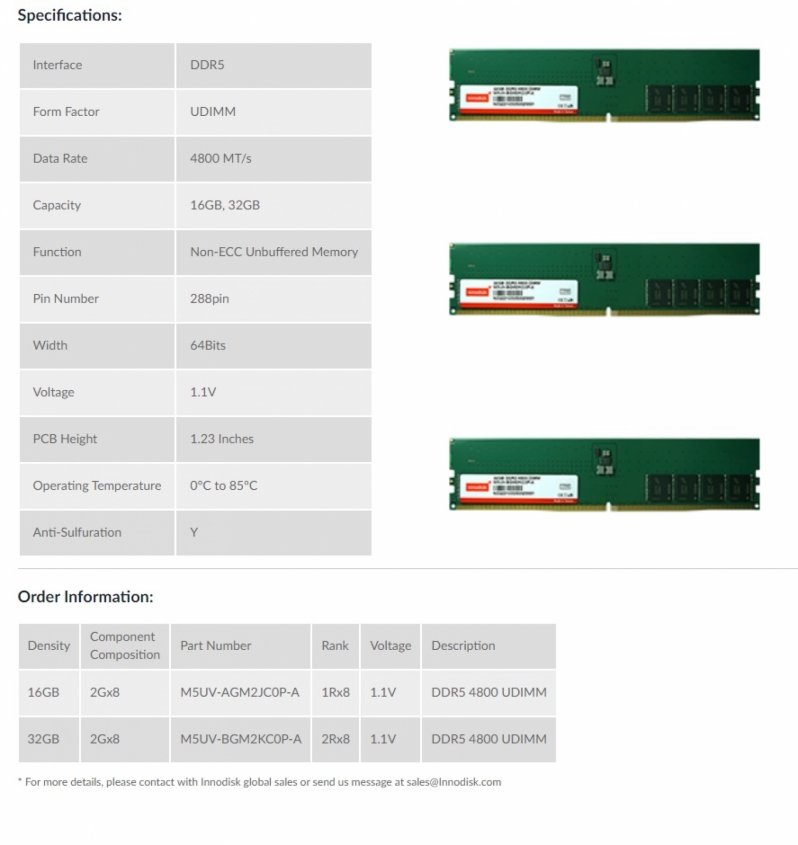