Will these DDR5 modules be an overclockers dream?

Sabrent has entered the DDR5 market with "High-Performance" DIMMs

Over the past few years, Sabrent has quickly become a well known brand amongst PC enthusiasts, primarily for their high speed SSDs and other storage devices. Now, Sabrent has entered the DRAM market, and today, the company has revealed their first DDR5 memory offerings, promising users "high-performance", "low latency", and "plenty of headroom" for overclocking.

Today, Sabrent has revealed 8GB, 16GB, and 32GB DDR5 memory modules, all of which offer users 4800 MHz speeds. Sadly, Sabrent has not revealed the CAS timings of these new DRAM modules, though we expect those to become clear in the near future. While Sabrent's press release for these modules cite "low-latency" as a feature, it is likely that these DRAM modules will use JEDEC standard timings.

With their new Rocket series DDR5 memory modules, Sabrent has marketed overclocking as a feature. Sabrent has stated that "for those that want to OC these kits, there is plenty of headroom to advance speeds". If Sabrent is to be believed, these DRAM modules are designed to be overclocked. 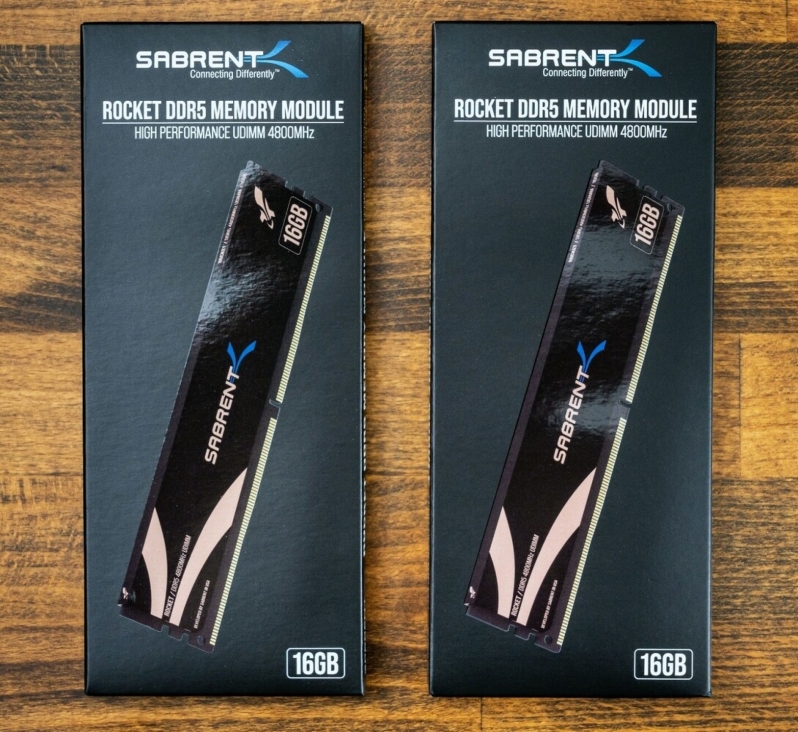 - LESS VOLTAGE, BETTER EFFICIENCY: DDR5 requires less voltage, which results in lower power consumption than DDR4. On-module power management further increases efficiency and reduces motherboard complexity.
- UP TO DOUBLE THE BANDWIDTH: DDR5 allows for up to double the bandwidth of DDR4, reducing a memory bottleneck. Content creation, gaming, and more will benefit from these rocket-fast speeds.
- HIGHER PERFORMANCE: DDR5 has other internal improvements that lead to better overall performance. Make the most of your memory and reach the next level in gaming with these new technologies.
- HIGHER CAPACITY: DDR5 can have up to four times the capacity in the same space, making sure you never run out of memory again. More is better, especially if you're juggling sixteen cores or more.
- COMPATIBLE AND RELIABLE: DDR5 also has improvements to error correction, making sure your experience is consistent and reliable. Further, our memory meets all JEDEC memory standards, so it's easier than ever to upgrade and be on your way. Installation is always simple and easy, too.

You can join the discussion on Sabrent joining the DDR5 memory market on the OC3D Forums.

NeverBackDown
Those actually look quite nice. Plain and simple but most importantly no RGB lolQuote
Reply