Fast memory is vital within today's PC market, providing the data capacity and bandwidth required to complete all of today's computational tasks. Within the mobile market, both the power draw and performance of DRAM is essential, as faster memory can complete workloads faster, reducing the amount of time components are in a high power state, and more power-efficient memory can increase a system's battery life.

With processors like Apple's M1 MacBook silicon using LPDDR4X memory at 4,266Mbps, it is easy to see how LPDDR5X can boost the performance of mobile devices. LPDDR5X can offer double the data rate of LPDDR4X, which could be great news for Apple's future M-series SoCs. LPDDR5X can offer users 8,500Mbps of memory bandwidth enabling a generational leap in memory performance over LPDDR4X and LPDDR5.

Another great example of LPDDR usage is Valve's Steam Deck, which uses quad-channel LPDDR5 modules that operate at 5500Mbps. A next-generation Steam Deck with LPDDR5X memory could offer users a boost in memory performance of over 50% if 8500Mbps modules are used.

Samsung has become the first company to create LPDDR5X memory, but it won't be the last. LPDDR5X is a JEDEC standard, which means that other DRAM manufacturers will create competing LPDDR5X chips. 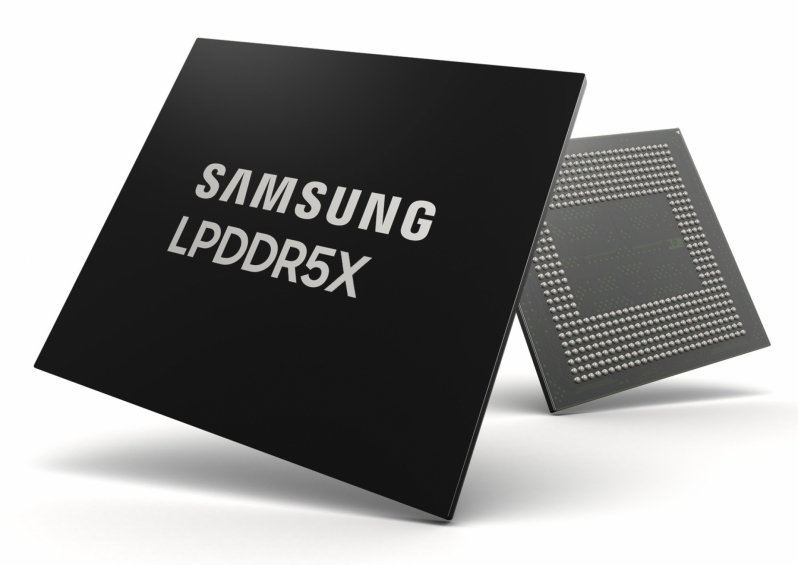 "In recent years, hyperconnected market segments such as AI, augmented reality (AR) and the metaverse, which rely on extremely fast large-scale data processing, have been rapidly expanding," said SangJoon Hwang, senior vice president and head of the DRAM Design Team at Samsung Electronics. "Our LPDDR5X will broaden the use of high-performance, low-power memory beyond smartphones and bring new capabilities to AI-based edge applications like servers and even automobiles."

The LPDDR5X DRAM will offer data processing speeds of up to 8.5 gigabits per second (Gbps), which are over 1.3 times faster than LPDDR5's 6.4 Gbps. Leveraging the industry's most advanced 14 nm DRAM process technology, it will also use around 20% less power than LPDDR5 memory. In addition, the 16 Gb LPDDR5X chip will enable up to 64 gigabytes (GB) per memory package, accommodating increasing demand for higher-capacity mobile DRAM worldwide.

Later this year, Samsung will begin collaborating with global chipset manufacturers to establish a more viable framework for the expanding world of digital reality, with its LPDDR5X serving as a key part of that foundation.

The company will look to broaden its pacesetting mobile DRAM lineup with continuous improvements in performance and power efficiency, while also reinforcing its market leadership with greater manufacturing agility.

You can join the discussion on Samsung's LPDDR5X DRAM on the OC3D Forums.