Did the big three work together to increase NAND pricing?

For the past two years, the price of DRAM has increased significantly, so much so that DRAM has quickly become one of the most costly components when building a new PC.

Hagens Berman, a US law firm, believes that these increases are not a simple matter of supply and demand, noting that between June 2016 and December 2017 that the cost of DRAM increased by 130%, seeing the revenue of every major NAND provide skyrocket. This increase has led to the firm taking on the three biggest players in the DRAM market, Samsung, SK Hynix and Micron with a class-action lawsuit, alleging that they used their consolidation of the DRAM market to fix the price of both DRAM and NAND memory.

When combined, Samsung, SK Hynix and Micron hold the vast majority of the DRAM market, with the suit stating that they own 96% of the market. Given DRAM's inelastic demand, given its usefulness in most modern computing technology, pricing can be increased without a significant decrease in demand. The suit states that there are no factors outside of demand that justify the increase in DRAM's market price, with manufacturing costs remaining similar and no innovation in the market to explain this price increase.

Another noteworthy factor is that NAND pricing began to decrease after Chinese anti-trust regulators opened an investigation into the DRAM industry, with both Samsung and SK Hynix announcing plans to increase manufacturing capacity.

Below is a statement from Steve Berman, managing partner of Hagens Berman.

What we’ve uncovered in the DRAM market is a classic antitrust, price-fixing scheme in which a small number of kingpin corporations hold the lion’s share of the market,

Instead of playing by the rules, Samsung, Micron and Hynix chose to put consumers in a chokehold, wringing the market for more profit. 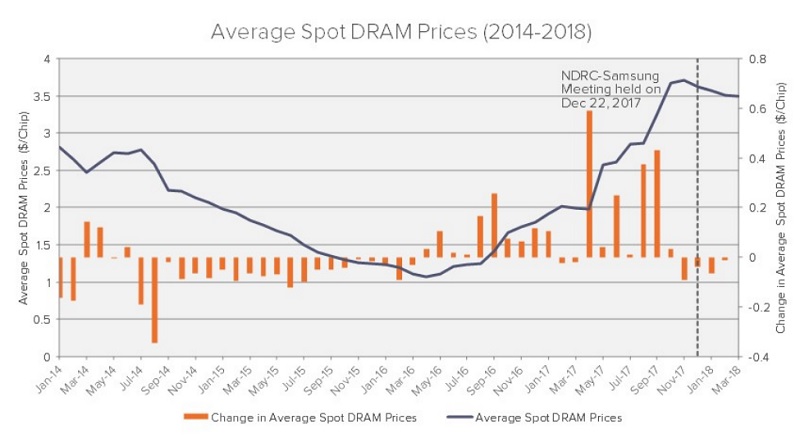 Hagens Berman has applied for class-action status and is currently seeking class members on the company's website, hoping to gain compensation for anyone who purchased a smartphone or computer between 2016 and 2017.

You can join the discussion on Samsung, Micron and SK Hynix getting hit with a class-action lawsuit over DRAM price fixing on the OC3D Forums.

Special thanks to TheF3ARChannel for the info.

I remember seeing this on the AMD subreddit and someone pointing out that the GPU draught was real but no evidence of DRAM/NAND draught since RAM, SSDs and everything were always in stock.

I hope the EU commission jump in on this as well.Quote

Dicehunter
Quote:
Would be nice for a government body to work FOR the people for once.Quote