SK Hynix brings in memory processing to GDDR6 with GDDR6-AiM

This memory can accelerate some workloads by up to '16 times'

SK hynix announced on February 16 that it has developed PIM*, a next-generation memory chip with computing capabilities.

*PIM(Processing In Memory): A next-generation technology that provides a solution for data congestion issues for AI and big data by adding computational functions to semiconductor memory

It has been generally accepted that memory chips store data and CPU or GPU, like human brain, process data. SK hynix, following its challenge to such notion and efforts to pursue innovation in the next-generation smart memory, has found a breakthrough solution with the development of the latest technology.

SK hynix plans to showcase its PIM development at the world’s most prestigious semiconductor conference, 2022 ISSCC*, in San Francisco at the end of this month. The company expects continued efforts for innovation of this technology to bring the memory-centric computing, in which semiconductor memory plays a central role, a step closer to the reality in devices such as smartphones.

*ISSCC: The International Solid-State Circuits Conference will be held virtually from Feb. 20 to Feb. 24 this year with a theme of “Intelligent Silicon for a Sustainable World”

For the first product that adopts the PIM technology, SK hynix has developed a sample of GDDR6-AiM (Accelerator* in memory). The GDDR6-AiM adds computational functions to GDDR6* memory chips, which process data at 16Gbps. A combination of GDDR6-AiM with CPU or GPU instead of a typical DRAM makes certain computation speed 16 times faster. GDDR6-AiM is widely expected to be adopted for machine learning, high-performance computing, and big data computation and storage.

*Accelerator: A special-purpose hardware made using processing and computation chips
*Graphics DDR (GDDR): a standard specification of graphics DRAM defined by the Joint Electron Device Engineering Council (JEDEC) and specialized for processing graphics more quickly, of which generation shifted from GDDR3, GDDR5 and GDDR5X to GDDR6. It’s now one of the most popular memory chips for AI and big data applications. 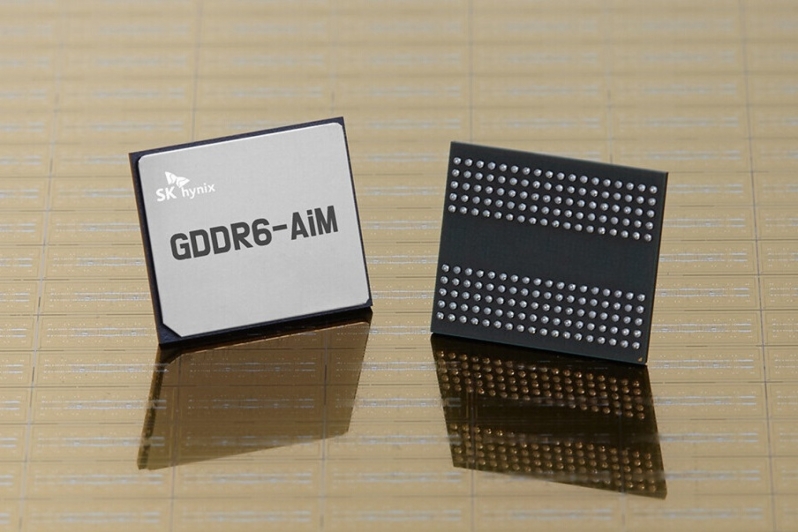 GDDR6-AiM runs on 1.25V, lower than the existing product’s operating voltage of 1.35V. In addition, the PIM reduces data movement to the CPU and GPU, reducing power consumption by 80%. This, accordingly, helps SK hynix meet its commitment to ESG management by reducing carbon emissions of the devices that adopt this product.

SK hynix also plans to introduce a technology that combines GDDR6-AiM with AI chips in collaboration with SAPEON Inc., an AI chip company that recently spun off from SK Telecom.

“The use of artificial neural network data has increased rapidly recently, requiring computing technology optimized for computational characteristics,” said Ryu Soo-jung, CEO of SAPEON Inc. “We aim to maximize efficiency in data calculation, costs, and energy use by combining technologies from the two companies.”

Ahn Hyun, Head of Solution Development who spearheaded the development of the latest technology and product, said that “SK hynix will build a new memory solution ecosystem using GDDR6-AiM, which has its own computing function.” He added that “the company will continue to evolve its business model and the direction for technology development.”

You can join the discussion on SK Hynix's GDDR6-AiM memory on the OC3D Forums.