These TUF-branded DDR5 memory kits will feature impressive memory clock speeds of 6,000MHz. Assuming that these modules have the same timings as their standard [unbranded] T-FORCE DELTA RGB counterparts, these modules will also feature relatively tight memory timings of CL38-38-38-78. These kits will be available in dual-module kits with module capacities of 16 GB, giving users a total of 32 GB of DDR5 memory.

Team Group and ASUS have designed these co-branded DDR5 modules to deliver users high performance levels out of the box, outpacing many competing module designs with Team Group's high module frequencies and relatively tight out-of-the-box CL timings. Sadly, we have not been provided pricing or availability information for these modules. What follows is Team Group's Press Release for its TUF Gaming Alliance co-branded DDR5 memory modules.

This should make you laugh 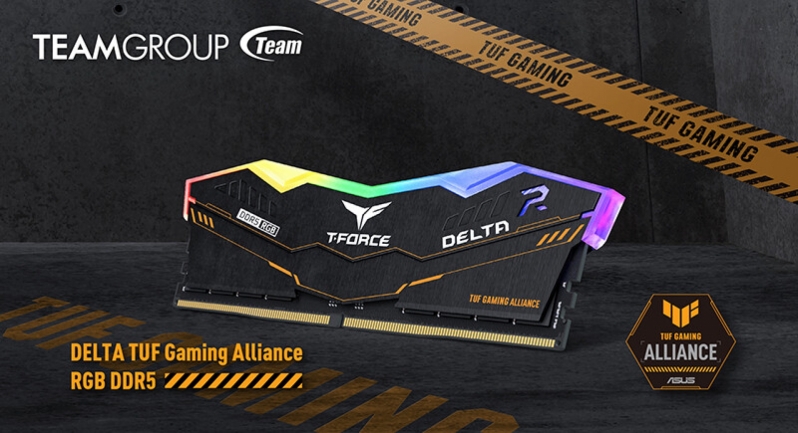 The T-FORCE DELTA TUF Gaming Alliance RGB DDR5 Gaming Memory maintains the RGB lighting along the top edges and its geometric wide-angled contour. With the addition of stealth fighter design elements to enhance the overall look, this new version is more striking than ever before. TEAMGROUP, in collaboration with TUF Gaming Alliance, gave the heat spreader a special camouflage pattern that showcases the unique gaming style of the TUF co-branding, which is sure to be a hit among fans of TUF. The dazzling RGB effects of the T-FORCE DELTA TUF Gaming Alliance RGB DDR5 Gaming Memory can be synchronized using ASUS Aura software, allowing gamers to easily create their own lighting setup. In terms of specifications, the memory clocks in at an impressive 6000MHz and comes in a 2X16GB dual-channel memory kit. This memory will satisfy gamers looking for the latest-gen hardware and give them a whole new feeling of extreme speed.

TEAMGROUP’s T-FORCE sub-brand and ASUS TUF Gaming Alliance are working together to release a variety of products that are popular worldwide, including solid-state drives and gaming memory. This DELTA memory is the industry's first co-branded DDR5 memory, and it will bring a new generation of technological evolution and stunning speed to gamers around the world. In the future, the two companies will collaborate on the launch of the T-FORCE CARDEA TUF Gaming Alliance Z440 PCIe4.0 M.2 SSD. Consumers can look forward to other joint projects between T-FORCE and TUF Gaming Alliance as they create more bleeding-edge gaming products.

You can join the discussion on Team Group's ASUS TUF Co-Branded DDR5 Memory Modules on the OC3D Forums.