These early DIMMs have high MSRPs

Team Group is hard at work to create some of the industry's first DDR5 memory modules, collaborating with CPU manufacturers and motherboard makers to ensure that their latest DIMMs are compatible with the latest technologies, preparing the consumer market for the DDR5 era.
Today, Team Group has launched their first DDR5 memory modules, the ELITE U-DIMM DDR5 series, which are due to be available to major EC platforms in late June or early July. These modules meet JEDEC's DDR5 specifications, with their initial launch offering 2x16GB kits of DDR5 memory that operate at 4800 MHz at 1.1V with CL40-40-40-77 timings.

While Team Group's press release, which is available to read below, the company mention's DDR5's on-die ECC (error correction code) support. While DDR5 supports this function, it is worth noting that it is not the same as the ECC protection available on ECC DDR4 memory modules. On-die ECC helps DDR5 reach higher levels of stability, enabling the standard to achieve higher frequencies; it is not the same data security mechanism that consumers associate with ECC.

With a price tag of $399.99, Team Group's early DDR5 memory modules are incredibly expensive, especially for what should be considered baseline DDR5 performance levels. That said, this is the price of early DDR5 adoption. DDR5 compatible CPUs and motherboards are not available yet, making this pricing applicable to companies, not consumers.
What follows is Team Group's Press Release.

At the end of 2020, TEAMGROUP reached a cooperation agreement with top DRAM wafer manufacturers and started working on DDR5 technology. Since then, TEAMGROUP has dedicated to the research and development of DDR5 modules, collaborating with various major motherboard manufacturers to ensure that each R&D stage undergoes comprehensive testing and to deliver products of the highest quality that the industry has ever seen. TEAMGROUP is leading the industry today as we announce our official launch of the world's first DDR5 memory module for desktops, the TEAMGROUP ELITE U-DIMM DDR5, which is estimated to be available on major EC platforms for consumers worldwide by the end of June and the beginning of July. 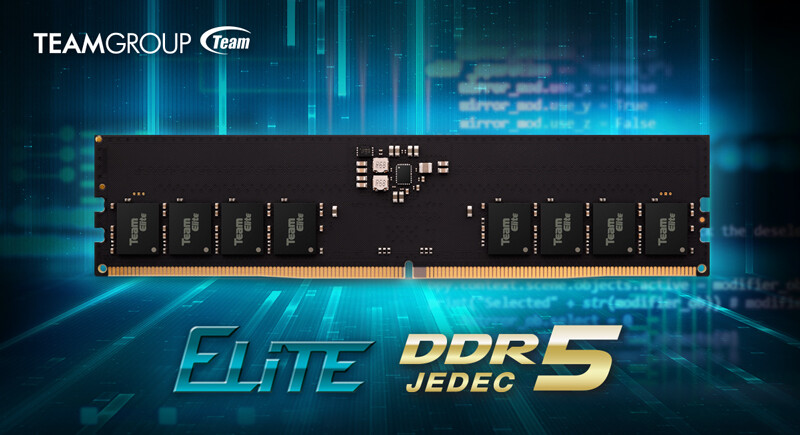 The initial launch of TEAMGROUP ELITE DDR5 memory module will support 16GBx2 of capacity at a frequency of 4800 MHz, with a voltage of 1.1 V CL40-40-40-77, which complies with the standard specifications defined by the JEDEC association. Compared to the maximum 3200 MHz standard frequency in the DDR4 generation, the DDR5 is able to increase the speed to up to 50%. The low 1.1 V voltage is also more energy efficient than its previous generation; to ensure minimum noise interference for the memory module, the power management is transferred from the motherboard onto the memory with an additional power management IC (PMIC) for more effective system load control. The most incredible feature of ELITE DDR5 is doubling the 16 banks of DDR4 to those of 32 in DDR5 to improve the IC structure, providing double access availability. An on-die ECC (error correction code) included in the DRAM IC is also available for self-recovery of the DRAM unit, ensuring that DRAM systems with DDR5 can obtain higher levels of stability.

The memory module is applicable for Intel 600 series motherboards with DDR5 compatibility. TEAMGROUP's DDR5 will be available globally at the end of June and the initial product launch will be hitting the shelves at Amazon US, Newegg, Amazon Japan, and various major EC platforms in Europe. Gamers, get ready for the first taste of the next generation and embrace the glory of the new DDR5 era with TEAMGROUP.

You can join the discussion on Team Group's Elite JEDEC DDR5 memory modules on the OC3D Forums. 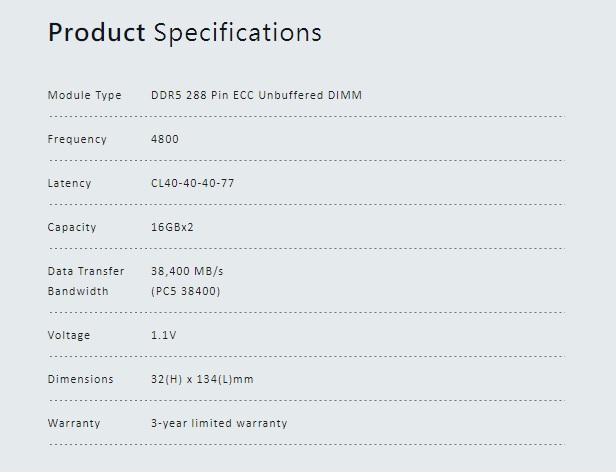 AngryGoldfish
Hmmm... maybe a Zen 3 refresh will be for me after all...