With their ToughRAM XG RGB series, Thermaltake offers their users speeds of 3600MHz, 4000MHz, 4400MHz and 4600MHz, with 2x8GB kit capacities and support for the latest CPU sockets from AMD and Intel. These units are also backed up with a Limited Lifetime Warranty.

With their standard TOUGHRAM RGB DIMMs, Thermaltake has managed to release a new 2x8GB kit which offers users 4800MHz speeds with CL19 timings with black and white colour options. Below is Thermaltake's press release on these new RGB DRAM modules.

Thermaltake, the leading PC DIY premium brand for Cooling, Gaming Gear, and Enthusiast Memory solutions, proudly announces two new memory launches. The first is the brand new TOUGHRAM XG RGB Series which comes in frequencies of 3600MHz, 4000MHz, 4400MHz, and 4600MHz 16GB (8GBx2). Designed with 2 different colors of aluminum and trimmed with a chrome stripe in the middle, the TOUGHRAM XG RGB aims for a unique style that is distinguished from common gaming memory modules.

The new modules inherit the same craftsmanship and quality expected from the TOUGHRAM name. To provide high and stable gaming performance, all ICs are tightly-screened and coated with a ten-layer PCB, constructed with 10μ gold fingers and 2oz copper inner layers to guarantee a higher standard memory module. Featuring 16 high-lumen addressable LEDs, the TOUGHRAM XG RGB is equipped with a X-shape light bar which can control 8 lighting zones, delivering a more comprehensive and dynamic lighting experience to RGB enthusiasts. In addition, the TOUGHRAM XG RGB can be controlled by the TOUGHRAM software which allows you to set more than 25 pre-installed lighting modes. Users can also choose the NeonMaker advanced light editing software as your powerful tool to set-up a timeline and even synchronize to other NeonMaker enabled components for customized spectacular lighting effects.

The second new memory launch is the TOUGHRAM RGB DDR4 memory in 16GB kits (8GB x2) with higher clock speeds of up to 4,800MHz. Thermaltake successfully pushes the boundaries to provide high-end selection for PC enthusiasts once again. Both the TOUGHRAM XG RGB and TOUGHRAM RGB memory series are supported by Intel Z490 and AMD X570, B550 platforms. For PC building enthusiasts who demand high performance and vivid visual delights, both TOUGHRAM XG RGB and TOUGHRAM RGB series are perfect options to create your own themes. 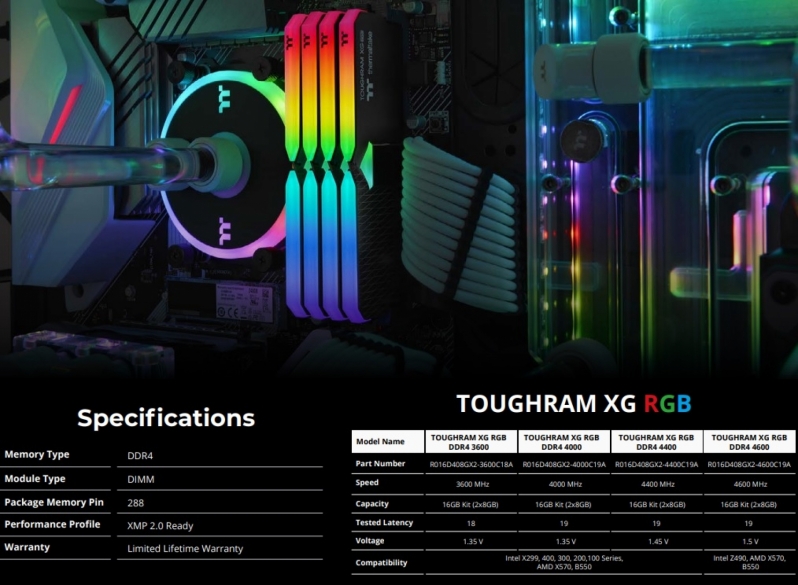 You can join the discussion on Thermaltake's high-speed ToughRAM XG RGB memory kits on the OC3D Forums. 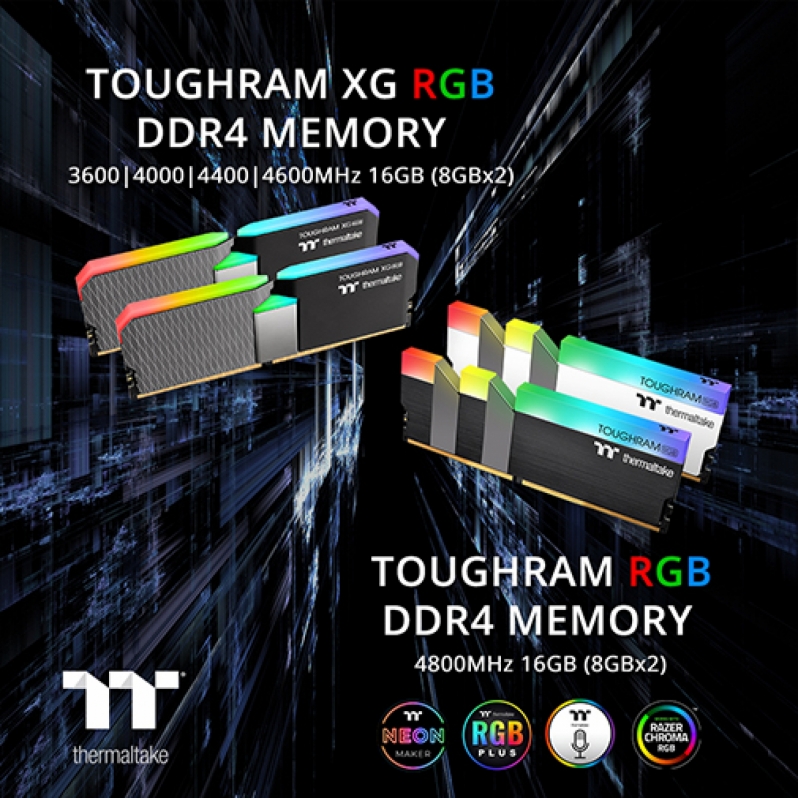