Amazon's killing off their "Smile" charity program this February

Amazon is not happy with the impact of AmazonSmile, so they are cutting it

AmazonSmile's getting axed over disappointing impact, despite over £380 million in global donations

Amazon has announced that they will be closing down their AmazonSmile program on February 20th, a charitable program that allowed charitable donations to be made that are equivalent to 0.5% of the proceeds of purchases from customers who join the program.

Ten years ago, we launched AmazonSmile to make it easier for customers to support their favourite charities. However, since launch, the programme has not grown to create the impact that we had originally hoped.

AmazonSmile represents a very small portion of the total charitable contributions made through our other programmes, which we estimate at more than £100 million in 2021.

We are writing to let you know that we plan to wind down AmazonSmile by February 20, 2023. We will continue to pursue and invest in other programmes that we know will have more impact—from providing support to families in need, to using our logistics infrastructure and technology to assist communities impacted by natural disasters.

We recognise that these are difficult times for everyone, including charities, so we are providing an additional one-time donation to participating charities equivalent to six months of what they earned through the programme in 2022, and they will also be able to accrue additional donations until the program officially closes in February. Once AmazonSmile closes, charities will still be able to seek support from Amazon customers by creating their their own wish lists.

AmazonSmile launched 10 years ago and has so far raised over £380 million for charities worldwide, which is around £38 million per year of operation. Charities will continue to receive donations until AmazonSmile's closure on February 20th, and receive a one-off payment that is equivalent to six months of what they earned through the program in 2022. 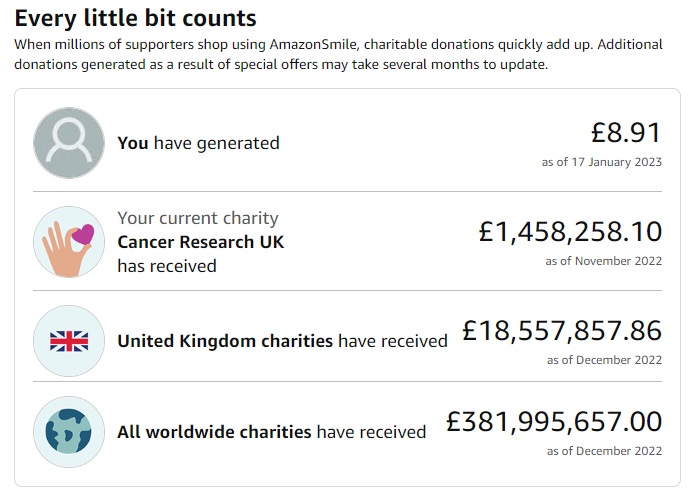 Amazon has stated that AmazonSmile only accounted for "very small portion" of the company's charitable giving, estimating that the company had made charitable contributions that are estimated to be more than £100 million in 2021.

The news of AmazonSmile's closure has been met with disappointment from charities globally, as they will soon no longer be able to generate donations through the program. Above, you can see that Cancer Research UK had raised over £1.4 million pounds from AmazonSmile as of November 2022, which is a huge amount of funding that. After February 20th, charities will no longer be able to rely on funding through AmazonSmile, a change that will strain these organisations.

You can join the discussion on Amazon axing their Smile charity program on the OC3D Forums.

There's a part of me that is DEEPLY sceptical.Quote

NeverBackDown
Who knew grossing towards half a billion dollars was a fail? Unbelievable if you ask me.


If it didn't grow enough it's because they did not advertise it enough. I never knew about it until this very moment. Sounds like a corporate failing again and blaming consumers.Quote

AngryGoldfish
Quote:
Yeah, never heard of this until now. I heard about the disastrous and Tokien-mockery that is Rings of Power though... everyone did... we couldn't avoid it.Quote

hmmblah
I use(d) AmazonSmile and had all my business purchases go towards St. Jude's Children Hospital. I got an email a few weeks ago saying AmazonSmile donated like $980,000 dollars to St. Jude over 2022. Maybe they should have limited the charities you could choose instead of closing the program altogether.Quote

WillSK
It's absolute bull. AmazonSmile gave the opportunity to give money to smaller charities who could use every penny. Now Amazon want to just give it to who they feel are able to "Make an impact" with it.

I guarantee it's a cost cutting venture and nothing to do with corporate social responsibility.

As the others have said, they did a terrible job of advertising it and unless you used a browser add on like I did, it was easy to forget to use the smile URL to make your purchases.Quote
Reply