AMD has just posted their Q3 financials, and they are impressive, revealing revenues of $2.8 billion and an operating income of $449 million. When compared to prior quarters, AMD's GAAP revenue for Q3 is up 45% when compared to Q2 2020 and up 56% when compared to Q3 2019, huge gains for any company.

Strong sales growth for AMD's Ryzen and EPYC processors have contributed to these revenue increases. That said, the impending release on next-generation consoles from Sony and Microsoft have allowed AMD's Semi-Custom revenue to increase significantly. In prior quarters, AMD's semi-custom revenue had fallen sharply due to declining console demand. The release of Sony's PlayStation 5 and Microsoft's Xbox Series X/S systems will allow AMD to generate significant revenues through their use of AMD's semi-custom silicon. 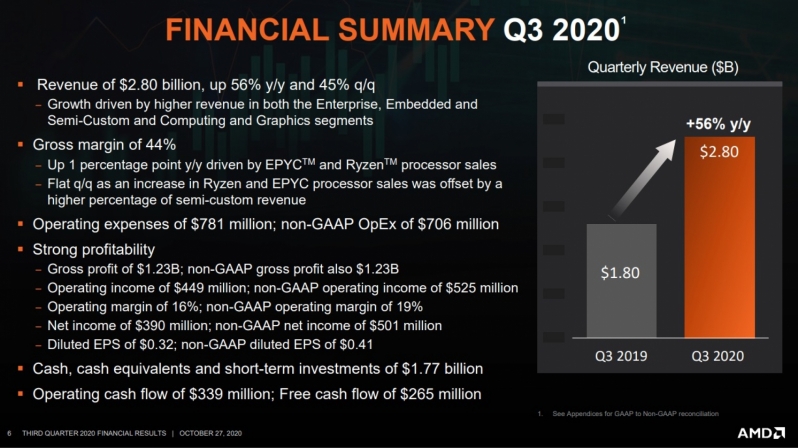 AMD's Computing and Graphics Segment has seen its revenues increase to $1.67 billion, seeing 31% growth year-over-year and 22% growth quarter-over-quarter. These gains come primarily from Ryzen processor sales and are offset by lower graphics revenue. Lower graphics revenues were expected given the upcoming launch of AMD's Ryzen 6000 series and the recent launch of Nvidia's Ampere architecture. 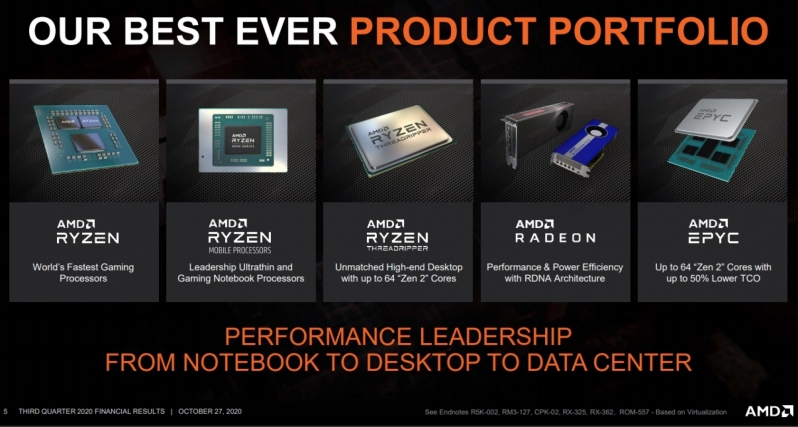 AMD has increased its Q4 2020 revenue expectations to $3 billion, expecting revenue growth of 41% year-over-year and 7% growth quarter-over-quarter. Gross Margins are also expected to increase to 45% this quarter, boosting AMD's profitability.

For their full-year 2020 revenue, AMD now expects to see larger than expected revenue growth, increasing their growth expectations from 32% to 41%. This the launch of Zen 3 Ryzen/EPYC processors and new RDNA 2 graphics products, AMD is expecting strong sales as 2020 comes to a close.

AMD has also confirmed that they will be acquiring Xilinx for $35 billion. This deal is expected to close before the end of 2021. More information about this acquisition is available here.

You can join the discussion on AMD's massive revenue gains during Q3 2020 on the OC3D Forums.