AMD's R&D spending has exploded, and things should only get better in 2022

AMD has boosts its R&D Spending throughout 2021

2021 has been a huge success for AMD, with the company growing its yearly revenue by 68% over 2020 while projecting a further 31% growth. With rising margins, AMD has been able to increase their income by a higher percentage, giving the company more money to invest in their research and development.

AMD's boosted R&D spending should come as great news for the company's fans and backers. AMD's R&D funding is a direct investment in their future products, and a sign that AMD plans to continue innovating well into the future.

AMD's resurgence came thanks to their Zen CPU architectures and RDNA series graphics architectures. These architectures were developed on a shoestring budget, and AMD's increased R&D spending is a sign that greater and more complex products are on the horizon.

In recent years, AMD has diversified, and that diversity requires increased spending. AMD graphics segment has been split between their RDNA and CDNA graphics architectures, and from Zen 4 onwards it looks like AMD will be releasing different Zen cores for individual markets. With AMD's Zen 4 EPYC processors, AMD has created their Genoa and Bergamo series products, each of which are optimised for different markets (more information is available here).

When looking at these R&D numbers, it is worth noting that these numbers do not include data from Xilinx. AMD has confirmed that they expect to complete their acquisition of Xilinx in Q1 2022, and that means that all future financial results from AMD should list AMD and Xilinx spending as a single data point. This means that AMD's R&D spending for future quarters will not be directly comparable to prior quarters.

With Xilinx, their technology, and their patents, AMD will be able to take its technological roadmap in a new direction. While it remains to be seen how AMD will utilise Xilinx's technology, or how Xilinx will use AMD's technology, we can be certain that each company's expertise should be able to compliment the other's. 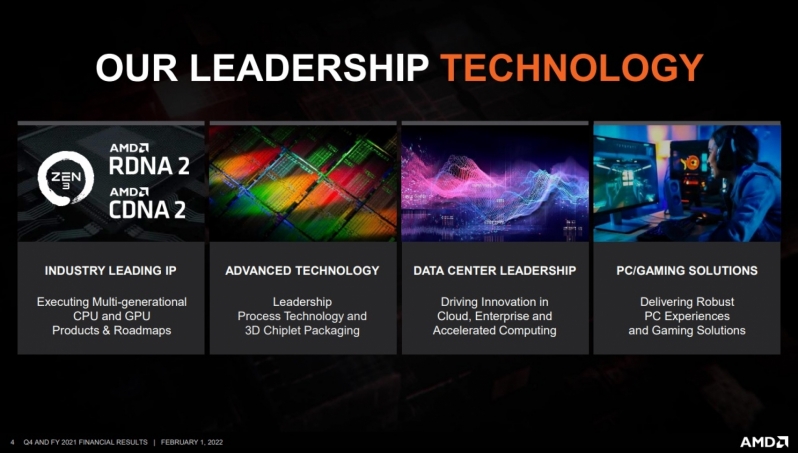 AMD's main concern right now is to ensure that its success continues in the coming quarters, which means that the company cannot allow its R&D efforts to fall behind. That said, the main factor that is preventing further growth for AMD is their limited supply of silicon and other materials. While increase R&D spending is good, AMD's growth is limited by how much product AMD can produce.

AMD needs a strong hardware roadmap to continue competing with both Intel and Nvidia, both of which have the ability to outspend AMD. Strong IP and continuous generational improvements will help AMD to continue its positive growth. Still, as its CPUs and GPUs become more complex, more and more effort will be required to continue pushing the performance envelope.

You can join the discussion on AMD's R&D spending on the OC3D Forums.