Is this what The Simpsons would look like in real life?

Who doesn't like a classic episode of The Simpsons, seasons 7-9 saw the show at its finest, offering watchers great episode after great episode. Fans of the series have been watching the show for 31 years, and outside of rare cases, every episode of the show has been in 2D.

Today, we are looking at some artwork by the 3D artist Steven Christopher, who recreated the Simpsons household in 3D using Unreal Engine, Blender and a Geforce RTX-powered laptop. Specifically, an NVIDIA Studio branded Gigabyte Aero laptop with a mobile RTX 3070.

While we would not like to see The Simpsons abandon its classic art style, it is interesting to have a look at the family's iconic sofa setup in 3D in its full ray-traced glory. Please Nvidia, don't try to convince Disney to make the full series 3D...

Looking at these images, it is amazing to think that such rendering is now available to laptop users. What was once the domain of server farms is now the domain of the masses, and while modern GPUs may be hard to come by, it is still incredible to see the levels of performance and rendering power that is possible within mobile form factors.

When discussing Stephen Christopher's project, a spokesperson at Nvidia said the following;

NVIDIA’s Studio platform makes creative applications and tools such as AI Denoiser accessible to all, enabling creators to supercharge their creative processes and take advantage of key technologies such as ray tracing and DLSS.

Steven’s project really brings to life the benefit of the RTX 3070 powered Studio laptop, which made light work of Blender, Painter and Unreal Engine. By speeding up the workflow the Studio platform is ultimately able to free up valuable time for Steven.

While this 3D rendered version of The Simpsons' iconic sofa scene is more "realistic", it is easy to see why the show hasn't transitioned to a full 3D rendered setup. Yes, it is possible, but as the saying goes "just because you can, doesn't mean you should".

As nostalgic as these images make me feel, there is a reason why The Simpsons and shows like it invest in a cartoonish art style. Avoiding realism has its perks, and while I would like to see a modern interpretation of The Simpsons Hit and Run for PC, that doesn't mean that I want to see The Simpsons go 3D.

Yes, releasing these images was a PR stunt from Nvidia, highlighting what is possible with their RTX hardware in their Studio branded laptops. This article is about remembering The Simpsons' classic episodes and imagining the horror that is a fully 3D season of The Simpsons. Please, Jensen, don't push Disney into making The Simpsons RTX...

You can join the discussion on The Simpsons RTX on the OC3D Forums. 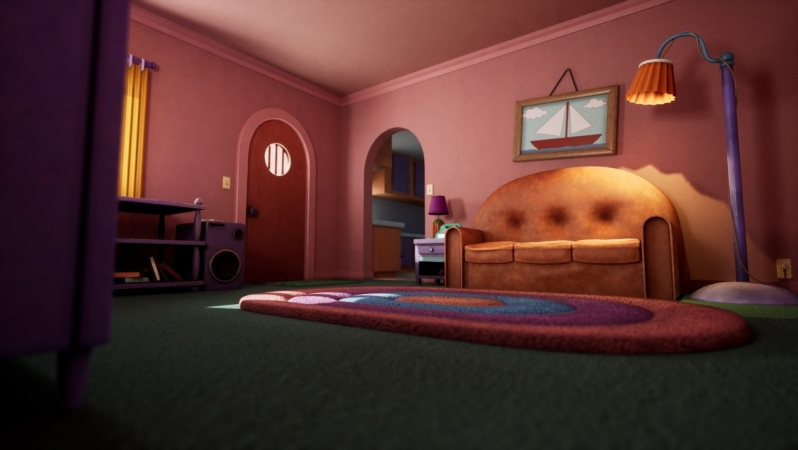