Need fast gaming WIFI over a wide area? ASUS may have the solution for you

ASUS has just revealed their first ROG branded Mesh WIFI system, the ROG Rapture GT6, a WIFI 6 Mesh WIFI solution that is available in both black and white colour schemes.

The ROG Rapture GT6 claims to offer users up to 5,800 square feet of WIFI coverage thanks to each unit's nine integrated antennas and ASUS' RangeBoost Plus technology. With its tri-band WIFI 6 wireless system, ASUS claims that they can provide users with ultrafast speeds of up to 10,000 MB/s.

Each of ASUS' ROG Rapture GT6 nodes features a 2.5 Gb WAN port, three Gb ethernet ports, a USB 3.0 connection and tri-band WIFI support. This system ships with two units in each pack, and additional nodes can be added to a network using ASUS' Router app. 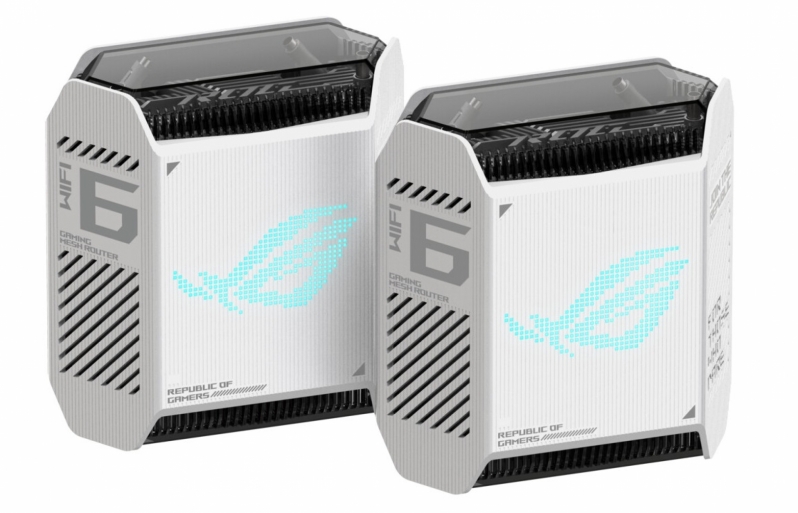 The ROG Rapture GT6 can deliver up to 10,000 Mbps of bandwidth, courtesy of two 5 GHz bands running at up to 4804 Mbps each, and one 2.4 GHz band running at up to 574 Mbps. This massive bandwidth can cover up to 5,800 square feet because of nine internal antennas and ASUS RangeBoost Plus technology. And for those who desire true multi-gigabit wired connections, there is also a 2.5 Gbps WAN port and LAN aggregation. Meanwhile, the ROG touch includes triple-level game acceleration to prevent jitter, reduce lag, lower pings, and increase speeds, empowering memorable gaming experiences.

The ROG Rapture GT6 is built with premium form and function in mind. It adopts a sleek design by moving its many antennas from the exterior to the interior. Its futuristic style is highlighted by an Aura RGB logo, slashed vents and the ROG tagline For Those Who Dare etched into one side. And on the top and bottom, ventilation grills are aligned with the heatsinks within, for ideal convective effects and heat dissipation. A Moonlight White edition is also available for those who prefer a brighter aesthetic. 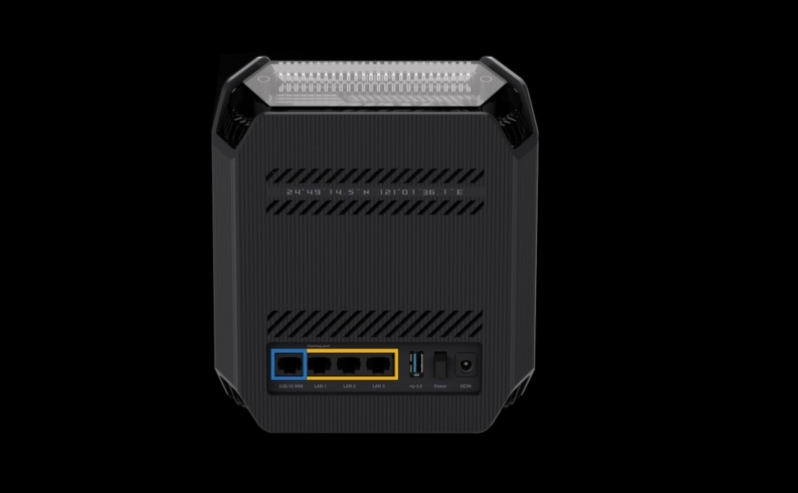 A Smart Antenna teams with RangeBoost Plus

The ROG Rapture GT6 also leverages RangeBoost Plus, the latest and most powerful evolution of the renowned and exclusive ASUS collection of wireless network technologies. Its next-gen Broadcom WiFi chipset team up with multiple cutting-edge ASUS features to expand signal range and overall coverage by up to 38 percent. This mesh WiFi system combines performance and beauty in a perfectly balanced package that takes the capabilities of whole-home WiFi 6 ecosystems to a new level of signal coverage and gaming experiences.

The latest ROG WiFi 6 routers also include access to a newly available 5.9 GHz band, in the form of a third high-power 160 MHz channel. This channel is tailored to provide more bandwidth to the devices that are particularly hungry for it, or to enhance backhaul capacity for setups that could benefit from additional signal power. The 5.9 GHz band has been set aside exclusively for newer wireless routers, so users with compatible WiFi devices can enjoy less connection interference than before, especially in office or apartment environments where many nearby WiFi 5 networks may be competing for signal delivery.

A newly enhanced ASUS network security package arrives with more features than ever. ASUS Instant Guard lets users leverage this router system as a VPN tunnel when they are on the go, for a more secure internet connection when using public WiFi. With the latest Instant Guard 2.0, the connection can now even be shared with friends and family via a simple URL link. Meanwhile, the Safe Browsing feature filters undesirable content from search engine results for a more family-friendly browsing experience. Free lifetime subscriptions for Instant Guard and ASUS AiProtection are provided to users,

The two-pack mesh system can be set up in just three steps using the ASUS Router mobile app, which can then be used to monitor the network and change settings, even when away from home. Alternatively, the single version can integrate with the app to extend AiMesh coverage with a few taps.

ASUS ROG Rapture GT6 will be available in Q4 in North America.

You can join the discussion on ASUS' ROG Rapture GT6 Mesh WiFi system on the OC3D Forums.