Australia's VCGLR has weighed in on Loot Boxes - They 'Constitute Gambling'

Australia's VCGLR has weighed in on Loot Boxes - They 'Constitute Gambling'

Regulators and legislators from across the globe are all coming to a realisation, that the "loot box" systems that are used in many modern video games are a form of gambling, forcing players to purchase boxes with unknown contents to obtain certain in-game items, with some look systems being tied to game progression or feature "pay-to-win" elements.

So far, the Kansspelcommissie, the Belgian Gaming/Gambling Commission, and the Hawaiian State Representative, Chris Lee have publically spoken out against these practices and revealed plans to regulate or ban said systems. Now a strategic analyst from Australia's Victorian (Victoria State) Commission for Gambling and Liquor Regulation (VCGLR) has revealed that the regulator does consider Loot Boxes as a form of gambling, judging by the definition of gambling in Victorian Legislation.

An Australian student, who appears under the name -Ceasar on Reddit, has contacted the regulator and received the following response, confirming that the regulator considers "loot boxes" as gambling and that the organisation plans to work with interstate and their international counterparts to develop wider policy changes and now legislation.

This response comes from Jarrod Wolfe, a Strategic Analyst for VCGLR;

My name is Jarrod Wolfe and I am the Strategic Analyst for the Compliance Division at VCGLR. I have received your correspondence in regards to gambling functionality (loot boxes) being incorporated into games.

Your research and suppositions on the matter are correct; what occurs with "loot boxes" does constitute gambling by the definition of the Victorian Legislation. Unfortunately where the complexity arises is in jurisdiction and our powers to investigate.

Legislation has not moved as quick as the technology; at both State and Federal level we are not necessarily equipped to determine the legality of these practices in lieu of the fact the entities responsible are overseas.

We are currently engaging with interstate and international counter parts to progress wider policy changes and to modernise and inform both Federal and State based legislation. We take on board responses from the community, such as your concerns, to ensure that our actions are reflective of the risks these products pose as well as the community’s expectation. Watching recent Reddit activity certainly indicates the majority of the gaming community is at odds with decisions made by certain companies.

The focus of my concerns currently is on the more predatory aspects related to "pay to win". Skins, skins betting and virtual currencies are certainly a peripheral consideration. However, the idea that (genuine) progression in a game could be reliant on the outcome of a random number generator is at odds with responsible gambling and the objectives of our acts. More importantly the normalisation of gambling vernacular and mechanics targeted at vulnerable persons (minors), is not just morally reprehensible, but is also legally questionable.

One solution that could help create change is to work with classifications bodies to force gambling elements to cause games to get an immediate R-rating, which is something that would certainly be helpful for cases like FIFA 18 which enjoys a 3+ rating in the UK despite its Loot-box like Ultimate Team system.

Gambling Legislation is something that is very difficult to enforce, as it is not designed to stop all unregulated gambling, like a game of poker amongst friends and requires a lot of evidence to bring to court. Beyond that, there is then the struggle of an expensive International legal battle to deal with.

To make a long story short here, while several regulators already consider these systems to be gambling, they lack the power to enforce these rules with the large multi-national companies that use them and the resulting legal battle will be extremely expensive and difficult.

Gambling isn’t necessarily “Unauthorised gambling” so there are a lot of variables at play. For perhaps a real world example think of overseas betting agencies. Such as Bet 365 – Australians can and do use this service; yet it is clearly administered and run from the UK.

This isn’t illegal. However, if that company set up “shop” in Victoria or started specifically advertising and offering gambling products to Victorians. Then we could investigate and it could be considered a breach of legislation and we would pursue, overseas or not. One of the downfalls is that using overseas based products, Victorian residents do not have us to investigate any complaints or issues they have.

Lootbox and “pay to win” set ups are even more nuanced than just being operated from overseas. Imagine if the legislation was read “strictly” and so you and a couple of friends have a poker game in your garage. You play for real money and sometimes other people join and leave. Now this is obviously gambling, however, is it “unauthorised gambling”? The legislation makes clear determination on some products such as Casino games and the like. But I don’t think parliament ever intended for a Compliance Inspector to kick in your garage door and fine you and your buddies for playing ‘texas hold’em’ in your garage.

In order for that to happen we would require far more definitive proof and details and identify profits and purpose and a lot of other factors. This would be the steps we would have to take in order to get close to showing that these video game functions are, strictly speaking, Unauthorised… even then, convincing a magistrate in a prosecution would be a whole other nightmare that would probably cost Victorian tax payers way more money than they would be willing to spend.

But I am a Strategic Analyst, my job is essentially to look at strategies to bring about changes without the necessity of kicking in garage doors and scaring the hell out of a bunch of students. Hence our interest in “loot boxes”. Enforcement is probably not an option, but we can consider working with other agencies to bring about change in other ways. For instance; if these companies want to include significant elements of gambling in their products then perhaps we should work with “The Australian Classification Board” to ensure than any product that does that and monetises it gets an immediate R rating. I could imagine that this would send ripples through the industry and it would support the objectives of the Gambling Legislation to ensure minors are not encouraged to participate in gambling.

As far as affecting change from the consumer perspective. For me, instead of playing certain Star Wars games I was looking forward to, I will be concerting my efforts on collecting EVERY.SINGLE.MOON in Odyssey.

Thanks for your interest. Nothing I am saying is secret; we are working on these complex problems and unfortunately solutions are a lot slower than the technology. The more people that know we are looking the better. The VCGLR want to set the example for dealing with these kind of issues; getting correspondence from you (and others) makes it a lot easier to gauge the feelings of Victorians and lets us know there is genuine interest and concern.

Wolfe notes that from a consumer side, gamers should avoid games that use such systems whenever possible and play alternative games like Super Mario: Odyssey, games that do no extort their players with such luck-based indirect methods of buying microtransactions. 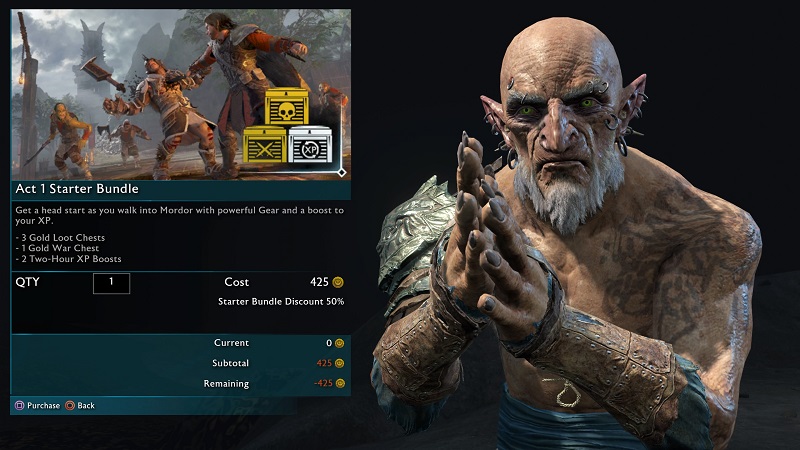 While many are already heralding these reports from regulators as victories against loot box systems, the problem is that we are still a long way off from any meaningful policy changes that will bring an end to such exploitative methods of monetisation. This is only the beginning

Star Wars: Battlefront II, Overwatch, FIFA 18, Middle Earth: Shadow of War and Need for Speed: Payback have all contributed to the huge backlash against in-game paid loot systems, though for now all that consumers can do is continue to raise awareness of these issues and not support games that utilise a system they do not support.

In the UK Star Wars: Battlefront II's launch sales were noted as being 60% lower than its predecessor, showcasing that consumers can have an impact on even the largest game publisher.

You can join the discussion on Australia's VCGLR weighing on in-game loot boxes on the OC3D Forums.

NeverBackDown
Articles seriously need to stop bringing up Shadow of War. It's far from a lootbox. It's not even gambling or P2W. Very very annoying that great game gets crap for no reason.Quote
Reply