Since the start of today's trading, Bitcoin's price has fallen by around 12%, decreasing the value of the digital currency by over USD 1,200.

This decrease in value has come after India's finance minister, Arun Jaitley, made comments which have suggested that increased cryptocurrency regulations will be coming to the country. Below is Arun's statement on the matter, suggesting that the government will regulate cryptocurrencies to "eliminate" their ability to be used for "illegitimate activities.

The Government does not consider cryptocurrencies legal tender or coin and will take all measures to eliminate use of these crypto-assets in financing illegitimate activities or as part of the payment system.

The Government will explore use of blockchain technology proactively for ushering in digital economy.

The past week has been filled with ups and downs for Bitcoin, stating at under $11,000 this time last week, increasing to a value of almost 12,000 and now dropping to under $9,000, showcasing the infamous volatility of the digital currency.

South Korea has also recently confirmed that they will not be banning Cryptocurrencies like Bitcoin, Ethereum and Ripple, opting to regulate the currency instead of taking stricter actions. 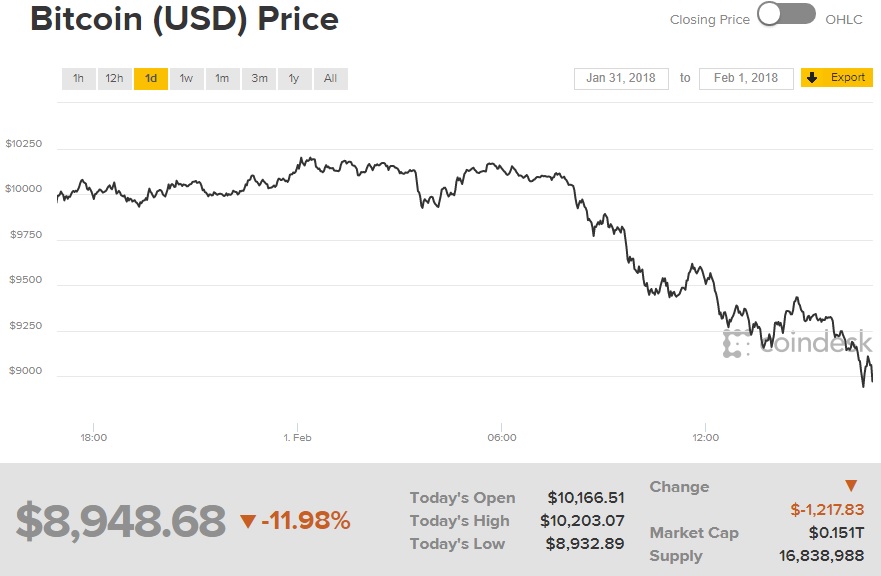 Bitcoin is currently trading at less than half of its peak December trading price of $20,000, leaving many to wonder whether the currency has a future, especially when considering the fact that some rival currencies are technologically superior. Others are heralding this as "the buying opportunity of 2018", expecting the value of Bitcoin to recover in time.

You can join the discussion on Bitcoin's drop under $9,000 on the OC3D Forums.