Bitcoin's value has already increased by over 25% in 2021

While Bitcoin's rising value is the continuation of a recent upward trend for the currency, it is undeniable that global uncertainty has played a role in Bitcoin's rise. Yesterday saw Donald Trump supporters storm the US capitol, alleging that the recent US presidential election was rigged against their preferred candidate. This event had had a huge destabilisation effect on the US dollar, making investments in alternative currencies, like Bitcoin, more attractive.

Recent months have also seen increased institutional investment in Bitcoin, with many using the term "Digital Gold" to describe the currency. This investment has increased demand for the currency and has increased its value. As of now, Bitcoin's market cap is $690.49 billion, making the currency larger than all but the eight most valuable publically traded companies.

Other major cryptocurrencies like Etherium, Stellar and XRP have also increased in value over the past 24 hours, highlighting an upward trend across the cryptocurrency market. Will this trend continue, will these currencies be devalued once stability returns to the US, who knows. Bitcoin has always been a volatile investment, and that is not due to change anytime soon. 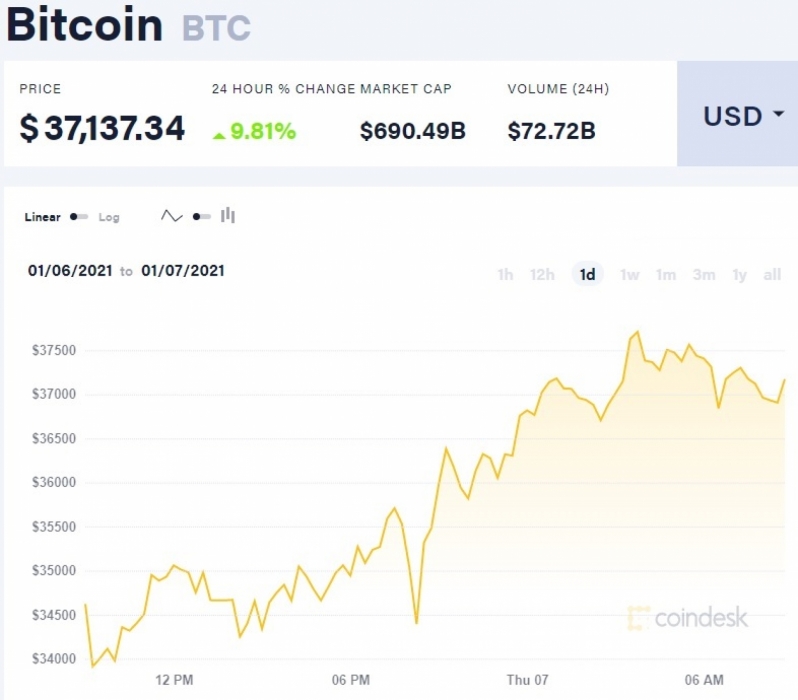 You can join the discussion on Bitcoin's value rising past $37,000 on the OC3D Forums.

Dicehunter
I know it won't happen but I hope by some computational miracle that crypto currency only becomes viable to attain using dedicated mining ASIC's and not GPU's as I can see this going south for those of us who may be in the market for a new GPU around summer.Quote

WYP
Quote:
Sadly a lot of currencies, like Etherium, are designed to be ASIC resistant. It is supposed to make mining accessible and prevent ASIC designers from controlling the market, but it puts stress on the GPU market as a result.

NeverBackDown
Quote:
In addition to what Mark said, it's all algorithm dependant and if the non ASIC currencies algorithms are all of a said being figured out they can just change the algorithm entirely. No miracles needed, it's just math

A miracle would be if AMD/Nvidia could just figure out a way to prevent miners from getting them so quickly before consumers have a chance.Quote

KingNosser
They sell directly to the miners, it'll never change

grec
It's worth noting that "ASIC Resistant" algorithms like Ethereum's Ethash just mean that they're designed in such a way that creating ASICs becomes expensive and with harder to achieve gains, Ethereum mining for example has been dominated by ASICs for quite a few years now, but the high memory requirements means these ASICs need updating regularly or to ship with lots of very fast on board RAM for a given launch date.

GPU Mining coming into use again is more from the rapid increase in value creating instant demand for mining transactions beyond that available in total current deployed ASICs, no one can get ASICs fast enough to fill the demand so GPUs are the 2nd best thing, with time the GPUs should again be replaced by ASICs for long term profitability.Quote
Reply