Blocky Graphics? This Lego Creator has Built a 3dfx Voodoo

Lego will consider making this if it gets 10k supporters

Blocky Graphics? This Lego Creator has Built a 3dfx Voodoo

3dfx Interactive was one of the top graphics card manufacturers of the mid-90s, having helped to popularise 3D graphics with the introduction of its iconic Voodoo graphics add-on card.

3dfx still has its fans, almost 20 years after the company went bankrupt, highlighting the impact this early 3D GPU manufacturer has had on the industry. But what if you wanted a new 3dfx Voodoo? A blocky graphics card for that new Lego PC build that you've wanted since childhood.

The Lego Creator Bhaal_Spawn has created a Lego version of 3dfx's original Voodoo graphics card, a blocky interpretation of the 1996 gaming classic. The graphics card currently sits on Lego's Ideas website, which considers fan-made products for manufacture if they get over 10,000 supporters. That's right, enough fan feedback could make this Lego 3dfx graphics card a reality, and you can pledge your support here. It will likely never happen, but I can dream, can't I?

Despite their limited capabilities in 2D games, 3dfx's Voodoo and Voodoo 2 were amongst the best gaming products for any PC gamers of that era. Even game developers couldn't help but support 3dfx, supporting the company's proprietary Glide API for 3D acceleration on supported hardware.

While Microsoft's development of DirectX eroded the value of the Glide API, taking away some of the key advantages of 3dfx hardware. Competing graphics card manufacturers were then quickly able to catch up, killing 3dfx's value proposition, which later caused the company to go bankrupt. 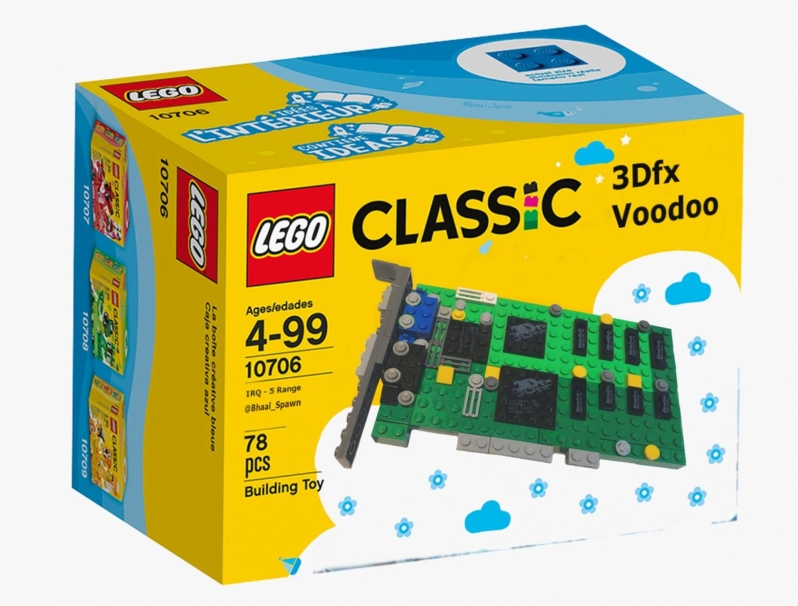 In recent weeks, Bhaal-Spawn has also created other unique Lego PC components, such as the Lego Sound Blaster Pro 2, another classic PC component from the 90s. Perhaps we need a Lego Pentium PC and motherboard, and that would allow us to build a full 90s era gaming PC. Nice!

You can join the discussion on the Lego Ideas 3dfx Voodoo graphics card on the OC3D Forums.

Warchild
I have the terrible TERRIBLE voodoo banshee. But.. it came with free Half Life so still a win right?

RobM
Bench marks are not at all good