If you know anything about 3D printing, you will know about Creality's Ender 3, an affordable FDM printer which has quickly become the go-to model for both beginners and enthusiasts alike.

The printer has Facebook communities surrounding it, subreddits that are dedicated to its use and countless models on Thingiverse that are designed to interact with this now-classic FDM 3D printer. There's hardly any FDM 3D printer that's as ubiquitous as the Creality Ender 3.

Now, Creality is ready for the next-generation of its Ender 3 product line, evolving past its Ender 3 and Ender 3 pro models to create something even better, a V2 design which delivers users major out of the box additions and silence-oriented upgrades. Meet the Ender 3 V2.

With the Ender 3 V2, Creality has given its users a wealth of silence-optimised upgrades, upgrading the printer's electronics with a self-developed motherboard which features TMC2208 drivers and an altered hot-end assembly.

On top of this, the Ender 3 V2 features a new screen and an altered user interface, giving users access to more data while the printer is operating. The printer's bed has also been upgraded to feature a craborundum glass platform, promising better 1st later adhesion than older Ender 3 models.

Another key upgrade is the Ender 3 V2's inclusion of a tool drawer, an addition that Ender 3 often 3D print for themselves. Adding this to the V2 will save users a lot of time and filament, while also giving them a place to store their spare parts, tools and accessories.

Like older models of the Ender 3, the V2 offers users a 220mm x 220mm x 250mm (X x Y x Z) build area, slightly undercutting the printer's maximum bed size of 235mm x 235mm. Like the original Ender 3, the V2 can likely use this extra area using custom firmware, though this alteration is not recommended for beginners.

The Ender 3 Pro's dimensions are very similar to Creality's older Ender 3 models, which makes sense given Creality's use of the same basic frame design. In many ways, the Ender 3 V2 is a heavily upgraded Ender 3 Pro, offering users a Meanwell-branded power supply and the same aluminium frame design.

While much of the Ender 3 V2 is the same as older models, the V2 should offer users a much better out-of-the-box experience, especially if you enjoy using quieter 3D printers.  Like the original Ender 3, the Ender 3 V2 supports 115V and 230V regions. 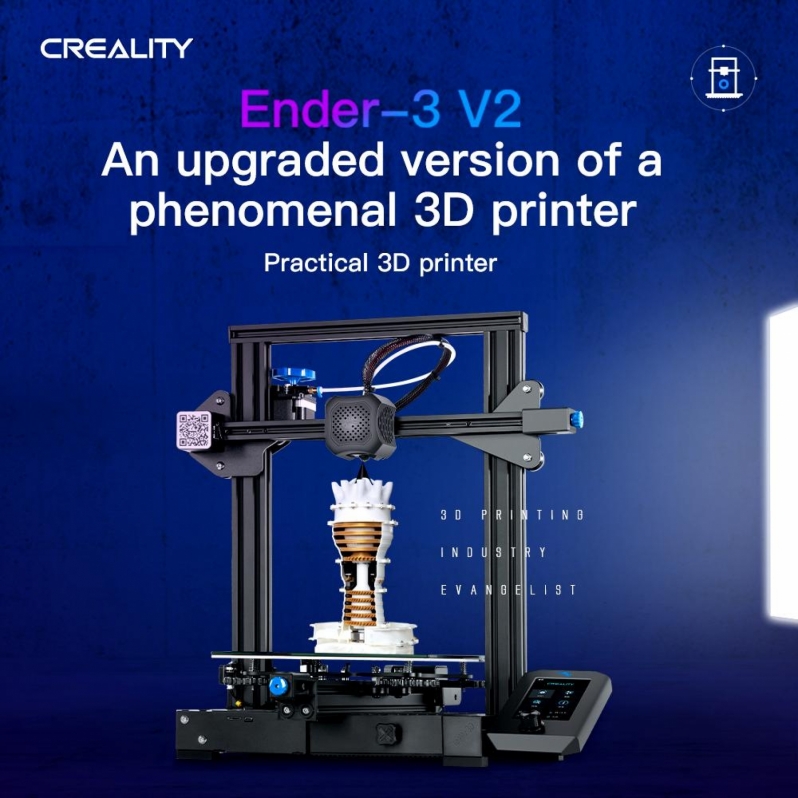 Creality's Ender 3 V2 is currently available to pre-order on Creality's website for $269. The printer is due to ship in mid-June.

You can join the discussion on Creality's Ender 3 V2 FDM 3D Printer on the OC3D Forums.

Jaxel
I've personally decided to never use a Bowden Tube printer again. Too many issues.Quote

WYP
Quote:
Fair enough. Haven't had many issues, but the idea of a direct drive extruder is compelling.Quote

Bartacus
I'm surprised that they still have a 3d printed extruder and not aluminum, and also surprised they don't just include brand name Capricorn tube.Quote

WYP
Quote:
3D printed extruder? It's plastic, but that ain't 3D printed. The metal inserts also will prevent the wear that the plastic ones once got.

Yeah, Capricorn tubing would be nice, but the whole point of the Ender 3 is that it is affordable. Need to cut costs somewhere.Quote

also my direct drive 3d printers are more delicate when it comes to print quality.


because of the added weight i have to print slower with my direct driver printers to achive the same quality.Quote
Reply