Yes, it is a LINKUP Ultra PCIe 4.0 Riser cable

EK's one of the world's premiere liquid cooling companies, and that means that their hardware is getting used within a lot of showpiece PCs and ultra-high-end desktops. Within this area of the PC market, customers want their PCs to look as good as possible, and for many, that means that they want their graphics cards to be vertically mounted, allowing users to look at their graphics cards with awe though their case's windowed side panels.

Vertically mounted graphics cards require PC builders to invest in PCIe riser cables, and for modern systems those riser cables need to be PCIe 4.0 compliant. To cater to these users, EK has launched their EK-Loop PCIe 4.0 Riser Cables, starting with 200mm long cables.

EK's new PCIe 4.0 riser cables are designed for use with Z590, Z690, X570, and B550 chipset motherboards, and have been tested using both Radeon RX 6000 series graphics cards and Nvidia RTX 30 series GPUs. These cables are true PCIe 4.0 extension cables, and they are backwards compatible with PCIe 3.0.

Looking at EK's images of their cables, it is clear that these cables are rebranded UPLINK Ultra series PCIe riser cables. We have recommended these cables before to PC enthusiasts, and we expect EK's branded cables to be of similar quality. Below is what EK has yo say about their PCIe 4.0 riser cables.

This high-speed 4.0 GPU riser cable features improved individual PCIe laneway shielding that blocks unwanted external EMI/RFI and interference between channels. EK-Loop PCI-E 4.0 Riser Cable is designed to match the PCIe impedance differential of 85 ohms. Signals that are traveling between the motherboard and the GPU are matched at the proper frequency without any capacitors in the cable that would introduce a potential point of failure and result in a less compact riser.

4-layer PCB with gold-plating was chosen for the best signal integrity and lifespan of the product. It was engineered with heavy-duty PCB/cable junctions to ensure increased durability. It is 200mm long and easily bends thanks to the flexible shielding of its wires. Flexibility comes extremely useful in tight-fit scenarios like small form factor (ITX) cases, where it truly shines. It has a 90° right-angle connector with a latch. 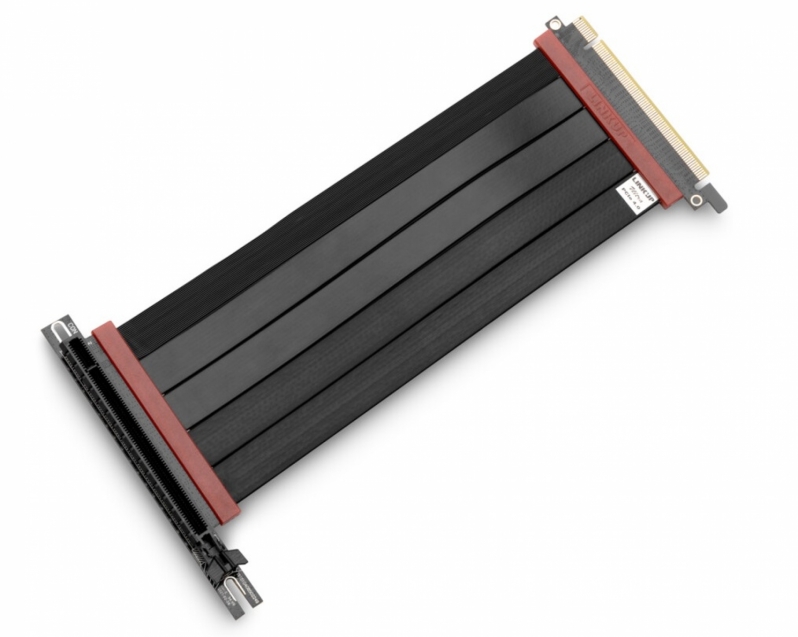 EK's EK-Loop PCIe 4.0 riser cables are available to order starting today from the EK webstore and the company's partnered retailers.

You can join the discussion on EK's EK-Loop PCIe 4.0 riser cables on the OC3D Forums.