Screws are notoriously easy to overtighten, and that can lead to a variety of potential issues. Overtightening can damage the heads of screw/bolts, destroy screw threads or cause other damage. This can make screws hard to remove or make it impossible to place new screws or bolts into a hole. For this reason, torque screwdrivers were invented, as they can make overtightening practically impossible.

If users are about to overtighten a screw, EK's precision screwdriver will audibly click and reset itself to relieve any pressure on your screw heads. This feature will prevent you from exerting too much force on our hardware and from damaging your components.

EK has started selling their EK-Loop Torque Screwdriver 0.6 Nm on their webstore for €19.90 with the following bits;

Below is EK's press release for their Precision Torque Screwdriver for PC builders. 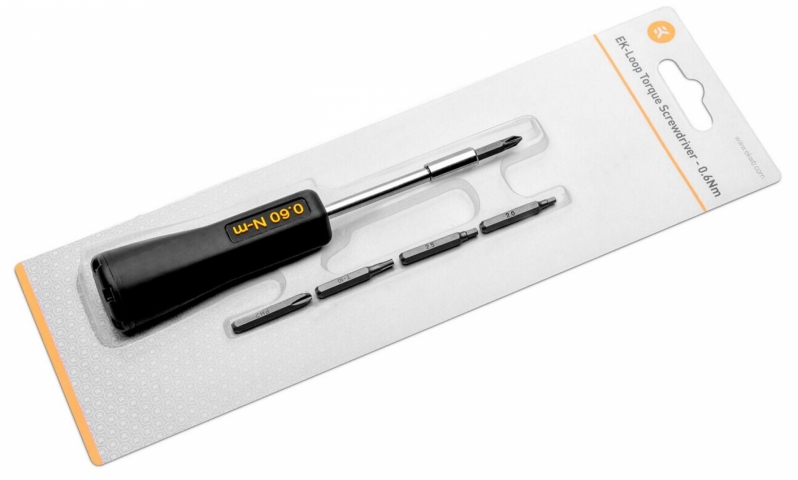 EK, is launching the EK-Loop Torque Screwdriver 0.6 Nm to provide its customers with the best and safest tools for their liquid cooling adventure. Assemble and maintain your water-cooling equipment without the risk of over-torquing and damaging your gear. EK is dedicated to being a one-stop shop for its users, making their loop-building experience easier and more accessible.

EK-Loop Torque Screwdriver - 0.6 Nm is a precision screwdriver that will allow you to precisely fasten screws. This screwdriver includes the 5 most common bits used for PCs and liquid cooling. It is set to 0.6 Nm torque. Upon reaching this force, an audible click is produced and the screwdriver resets. This way, you can no longer break your parts by using too much force as this tool will not allow you to. The soft-grip handle is made of TPR for comfortable use while building a loop.

The EK-Loop Torque Screwdriver is now available worldwide for an MSRP of 19.90 €.

You can join the discussion on EK's precision torque screwdriver for PC builders on the OC3D Forums.