Global Fastly outage takes down a tonne of the internet

OC3D stayed up, but Reddit, Twitch and GitHub were down

Global Fastly outage takes down a tonne of the internet

A large chunk of the internet was taken down this morning thanks to an outage at Fastly, a major CDN (content distribution network). Fastly' disruptions caused major websites to go offline across the globe, including Reddit, Twitch, GitHub, and even the UK government's GOV.UK domain. Thankfully, OC3D has remained online despite the disruption.

The errors started at 9.58 UTC and persisted for around an hour, giving browsers 503 errors and connection failure messages while affected websites were offline. Fastly has since implemented a fix for the issue, allowing websites to return to the internet from 10.57 UTC. That said, some lingering issues are expected over the next few hours as services return to the web.

At this time, the root cause of the internet outage remains unknown, aside from the fact that Fastly was the service behind the outage. Fastly are unlikely to confirm the exact cause of the outage, given the short term nature of the outage and how the company would seek to prevent the issue from being discussed more widely.

Sites that depend on Fastly are all coming back online, and soon, Fastly's CDN glitch will be forgotten about. 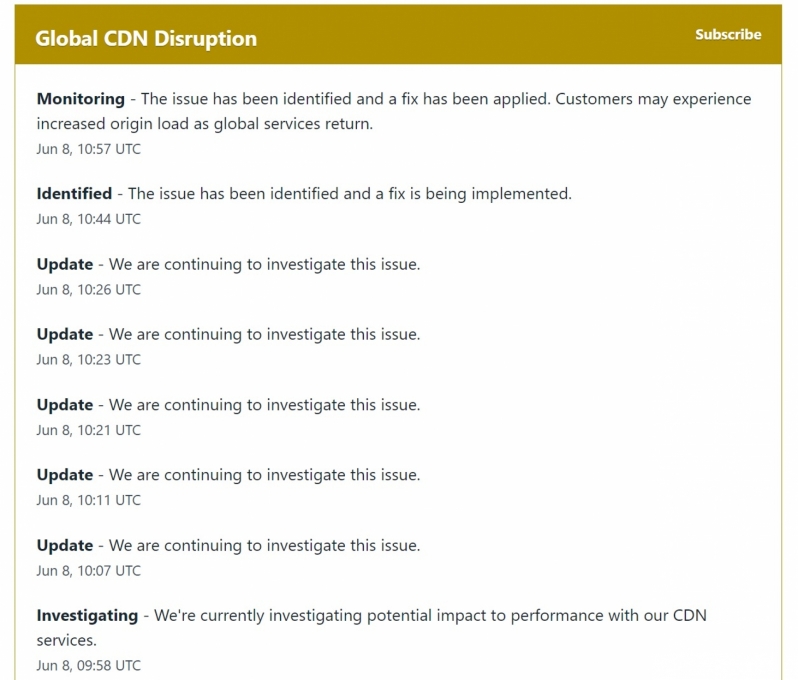 You can join the discussion on Fastly taking down a large portion of the internet on the OC3D Forums.

NeverBackDown
Would hate to have experienced this while using GitHub. Just imagine you're code push was corrupted and you ruined your production branch. Wou be a chaotic time to fix that while services are interrupted

NeverBackDown
Quote:
If their services aren't working it's not gonna push