Home Broadband speeds are expected to reach 50 Gbps by 2030

Home broadband speeds are expected to reach speeds of up to 50 Gbps in 2030, that's the latest prediction from the World Broadband Association (WBBA), who recently released a white paper that details what they believe is the future of broadband internet.

While 50 Gbps broadband speeds are expected in 2030, the rollout of broadband packages with these speeds will vary significantly from nation to nation and region to region. Today, the world is transitioning to 5th generation fix broadband technologies (BB5), that offer residential speeds of 1Gbps and enterprise speeds of up to 100 Gbps. The next step for home broadband is B5.5, which promises home broadband speeds of 10 Gbps and 400-800 Gbps enterprise speeds, and by 2030, many regions will be moving to BB6 broadband.

To take into account future network demands, the WBBA recommends that as the industry approaches 2030 and beyond, leading operators should be working toward networks that will be capable of this – residential speeds of up to 50Gbps and enterprise speeds of up to 3.2Tbps, providing fiber connectivity to individual sensors, being fully autonomous, having deterministic reliability with less than 1ms latency guaranteed, more energy efficiency per bit and very fast security breach detection and response (seconds), 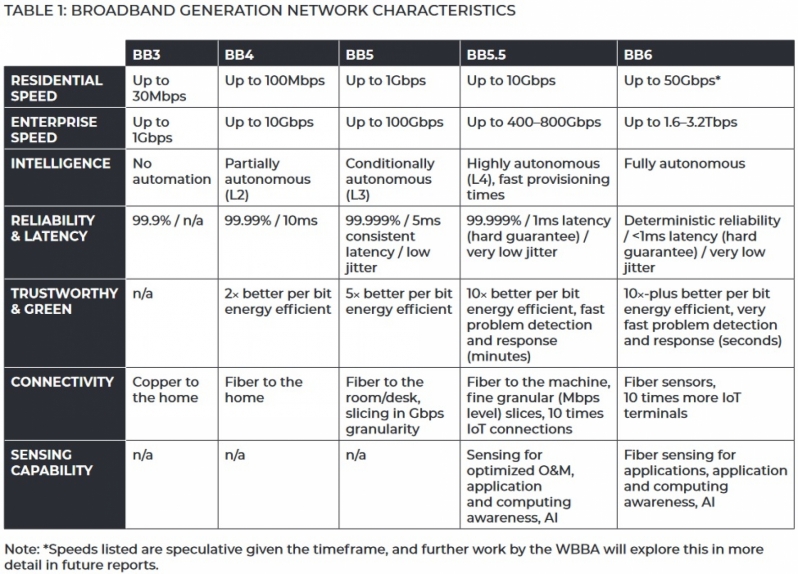 Some UK companies have already started to offer 10-20 Gbps connection to home users through Fibre-to-the-Premises (FTTP) technology, and connections like this are expected to become more commonplace over the coming years.

Currently, it is questionable whether homes will need up to 50 Gbps home broadband connections in 2030. For many homes, 1 Gbps connections are already excessive, but as video streaming, game streaming, and other streaming technologies grow in popularity, users will desire higher quality content that will necessitate higher speed internet connections. On top of that, as working from home continues to grow in popularity, more and more home users will require fast upload and download speeds to move files and projects between co-workers.

The good news for citizens of the internet is that faster broadband technologies are coming, and the rate of innovation does not appear to be slowing down.

You can join the discussion on the World Broadband Association's broadband predictions on the OC3D Forums.

Dicehunter
Average speed in the UK right now is 50Mbps with the majority I know personally being on 20Mbps and the cost of even basic net here being ridiculous for what you actually get.

The UK really needs to get its rear into gear as it is decades behind the rest of Europe in every single aspect.Quote

Dawelio
Quote:
Lol, that is genuinely bad... I even get more than that with my old Nokia 3310.Quote

Dicehunter
Quote:
There are a few places here that have really fast net speeds but overall it is very far behind the EU, I live near a main city and the best available here is 20Mbps with fiber maybe coming by 2035... maybe... I know people who live in the middle east in cities in the middle of a desert that are on gigabit speeds, The UK is a bad joke.Quote

Warchild
Quote:
Tell that to the COD players who need to download 150gb with a 10mbps speedQuote
Reply