Earlier this year, we reported on the LOTMAXX SC-10 SHARK 3D printer, and its early success through Kickstarter. Now, LOTMAXX has given its fanbase a second chance to snag early units, thanks to a second wave of crowdfunding through IndieGoGo.

Right now, LOTMAXX's IndieGoGo campaign appears to offer similar pricing to the company's Kickstarter and fewer purchasing options. At the time of writing, IndieGoGo purchasers can pre-order their LOTMAXX SC-10 Shark with an Auto-Levelling add-on or with all of the printer's optional accessories.

When it comes to 3D printing, there are three things that newcomers should look for in their printer, ease of use, upgrade headroom and capable electronics out of the box. Today, we have a printer that appears to meet all of these criteria, LOTMAXX's upcoming SC-10 Shark, a 3D printer which starts at $279 and offers users a large build area, multiple easy-to-use upgrade options and quiet TMC2208 drivers out of the box. The SC-10 SHARK also features several upgrades which are popular amongst 3D printing hobbies out of the box, offering users a dual-gear extruder and a filament runout sensor out of the box. This printer also features a 32-bit ARM processor at stock and ship with 200 grams of PLA for test prints. What about the Ender 3? By today's standards, Creatlity's Ender 3 is old, and the design has plenty of room for improvement. With the LOTMAXX SC-10 SHARK, buyers are offered a larger build area, multi-directional part cooling, silent TMC2208 stepper motor driver out of the box and support for tethered touchscreen controls.   With a starting price of $279 on IndieGoGo, the LOTMAXX SC-10 SHARK offers customers a lot of value, especially when compared to other printers with a 235mm x 235mm x 265mm build area. LOTMAXX has also thought ahead and has designed their SC-10 SHARK with upgradability in mind, supporting upgrades for automatic bed-levelling, laser engraving and dual-filament extrusion. You can perform the same upgrades on other printers, but LOTMAXX is the first company to make these upgrades practically plug and play.

Right now, the IndieGoGo model of this printer will ship with a self-levelling sensor out of the box, allowing the SC-10 SHARK to feature automatic bed levelling.  Further additions like the addition of a filament runout sensor have also elevated the SC-10 SHARK into competition with premium 3D printer designs like Creality's CR-6 SE, which is an amazing feat given this unit's pricing. If you are looking for a user-friendly 3D printer, LOTMAXX SC-10 SHARK has you covered.

Easy UpgradesAs we have mentioned before, the LOTMAXX SC-10 SHARK has three upgrade options that are available to its users out of the box. These upgrade kits allow users to provide auto bed-levelling with a 3D Touch or BL Touch add-on, Laser Engraving through the addition of an optional 1.6W laser and bi-colour printing though another simple add-on. All of these upgrades are plug and play, requiring no firmware upgrades, soldering, or interference with your printer's power supply. LOTMAXX has given its users a clear upgrade path, and with that users can throw upgrade anxiety out the window. Users will be able to buy simple upgrade kits which feature all of the screws, mounts and supplies that are needed to make things work.

Night ModeOne interesting feature of the SC-10 SHARK is its "Night Mode", a special mode within the printer which enables silent printing. This mode will allow users to slow down the speed of their printer for nighttime printing or whenever quieter operation is preferred. If you are in the middle of a 10-hour print and need to use your 3D printing room for something else, Night Mode could be a godsend. A slower quiet print is much better than a cancelled print.   User-Friendly Touchscreen controlSick of bending over to read and adjust the options on your 3D printer? That's where LOTMAXX SC-10 SHARK's user-friendly touchscreen controller comes into play. Simply lift the printer's screen from its dock and move it to where you feel most comfortable. This design change is so brilliant that I want it for my own 3D printer. A great idea from LOTMAXX.

Laser EngravingLaser engraving Upgrade kits for other 3D printers usually are difficult, if not dangerous, to install. Typically, those who use these upgrades need to disassemble their printer's electronics to get these kits to work, and even then these kits are problematic when it comes to build quality. One example that we know of attaches its laser engraver to a 3D printer's extruder using magnets, and will only work when users rewire their 3D printer's power supply. Talk about potential danger. Thankfully, with the LOTMAXX SC-10 SHARK, you will have none of those concerns. LOTMAXX supplies a stable mount for its engraving tool and can power their unit using a simple plug and play installation method. The video below showcases how this install process works.

There's a lot to like about the LOTMAXX SC-10's design, from its below-the-unit power supply to its accessible upgrade features. Is what you want from a 3D printer is simplicity; the SC-10 SHARK appears to be a fantastic unit given its low crowdfunding pricing. With the early units with auto bed levelling costing $279 and the fully kitted out version with auto-levelling, bicolour printing and laser-engraving costing $399, you get quite a lot for your money. Most other printers require a lot more work to get these upgrades to function correctly, especially on cheaper units. 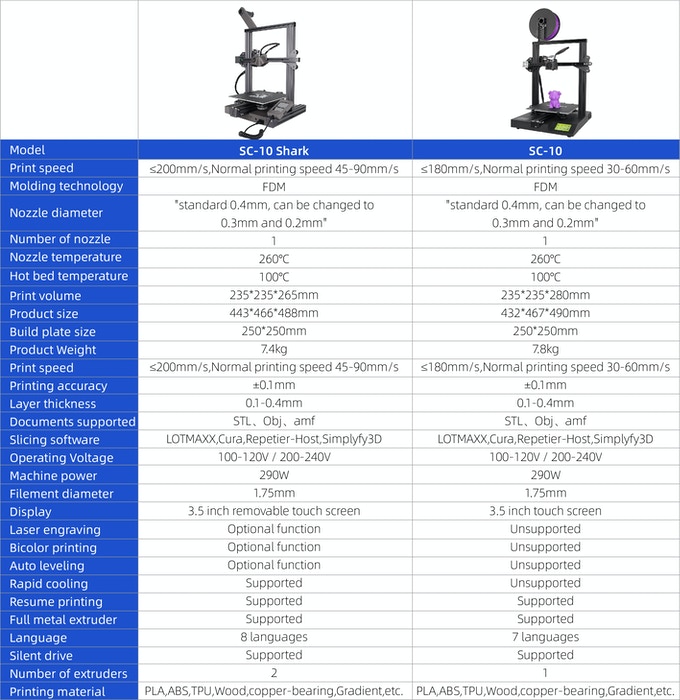 The design features of this 3D printer fills us with excitement, as it makes high-end 3D Printing features and engraving more accessible than ever before. LOTMAXX, if you are reading this, we would love to have a look at one of your printers. You can learn more about LOTMAXX's SC-10 SHARK on the 3D Printer's IndieGoGo page.

Join the discussion on the LOTMAXX SC-10 SHARK 3D Printer on the OC3D Forums.

WYP
Quote:
As much as I want to spend more money on 3D printing nonsense, it isn't the right time for that. I'm getting married next year and that will be £££.

Paid off the taxman recently and just bought my fiancee her wedding band, neither of which were cheap.Quote

Dicehunter
Quote:
Should have just used one of those rings from the little toy vending machines and saved yourself the cash

WYP
Quote:
My intention is to spend that money once, so I don't mind paying for the "right" ring. Anyway, this is off topic.

As much as I'd love the slightly larger build area and the extra features, it's not worth getting a new printer for it.Quote