Creality's Ender 3 remains one of the best 3D printers in the market for newcomers, offering buyers an affordable pricepoint, reliable components and a tonne of upgrade potential.
Many users of 3D printers will eventually outgrow their first printer. Eventually, they may need a larger build area to meet the requirements of their latest project. When that happens, that typically means that you need a new printer, but now users of Creality's Ender 3 have another option, the Ender Extender (also known as Ender Xtender). Note that these Ender Extender upgrade kits were not created by Creality, they were created by a 3rd party manufacturer from the US. Upgrading your Ender 3 with an Ender Extender will void your warranty, and will require firmware modifications to allow your 3D printer function correctly with a larger build plate.  Creality's Ender 3 series ships with a stock build area of 220mm x 220mm x 250mm (L x W x H), but with the Ender Extender series of 3D printer upgrades, enthusiasts can upgrade their printers with build plates that are 310mm x 310mm or 406mmx 406mm in size. These upgrade kits are called the Ender Extender 300 and Ender Extender 400 respectively. Alternatively, a kit called the Ender Extender XL can double the Ender 3's Z-height from 250mm to 500mm.  Those who want to go large with their Ender 3 can even purchase an Ender Extender 400XL kit to provide a build area that's an insane 400mm x 400mm x 500mm in size, almost doubling the Ender 3's stock printing area in every dimension. This should be large enough for seemingly any hobbyist 3D print, at least until somebody needs a colossal 500mm x 500mm build plate. With Ender Extender series of upgrade kits cost between $99 and $239 in the US, with international shipping adding even more costs into the mix for non-US customers. These kits are expensive, but they cost a lot less than a new 3D printer of these sizes. This factor makes the Ender Extender series an exciting upgrade path for existing Ender 3 owners. Just be sure to buy a kit that is compatible with your Ender 3, as separate kits are available for Ender 3 and Ender 3 Pro series printers. Extending your Ender 3's build area is a challenging task, but the folks over at the Ender Extender website do provide its users with everything that they need to upgrade their printers. This includes machined aluminium extrusions, new lead screws, extended wiring, larger build plates and new x/y axis best, depending on your chosen extender kit. The only thing that users of these kits will need to acquire is new build surfaces, such as a sheet of mirror glass, to act as a flat build surface.Ender Extender kits for Creality's Ender 3/3 Pro series 3D printers are currently available to purchase here. 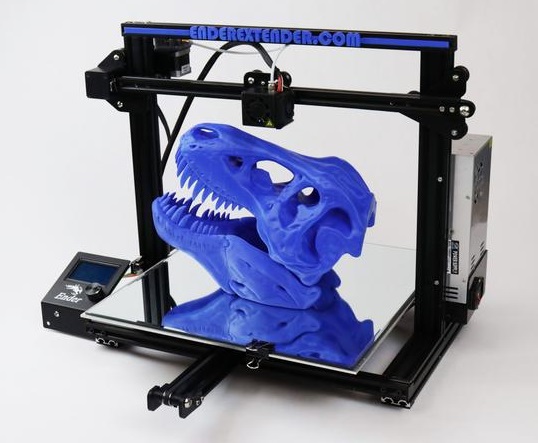 You can join the discussion on the Ender extender series of Ender 3 3D Printer expansion kits on the OC3D Forums.