Over 1,000 Bitcoin mining ASICs were destroyed

Bitcoin's rising value has caused a rise in energy theft across the world, where cryptocurrency miners steal electricity from their country's power grid to fuel the power demands of their power-hungry enterprises.

For cryptocurrency miners, power is a factor that contributes to the profitability of all major mining operations. The higher your electricity costs, the less profitable your cryptomining operation becomes. That said, if you are stealing your power, this cost is removed from the equation and profitability soars. Beyond that, such criminal actions can also make inefficient cryptocurrency mining tools profitable.

Thanks to a series of six raids in Miri Malaysia, 1,069 bitcoin miners were seized, and six people were fined and jailed. The value of the cryptocurrency mining tools seized has an estimated value of $1.25 million. These raids were conducted as part of a joint operation between Miri city authorities and Sarawak Energy Berhad (SEB). SEB has estimated that they lost RM8.4 million ($2 million USD) in energy to this illegal mining operation.

The Malaysian Government has decided to administer justice on these seized Bitcoin miners using a steamroller, destroying the precious machines so that they can no longer be used as part of illegal cryptocurrency mining operations. Better still is the fact that this was captured on video (via Dayak Daily), showcasing the destruction as it happened.

In this case, the destruction of these ASIC miners was the only viable option for the Malaysian justice system. According to the Miri Police, illegal electricity supply connections have lead to frequent power outages and three home-razing electrical fires in 2021. Currently, the Miri Police are working on new ways to detect illegal electricity connections and cryptocurrency mining operations.

You can join the discussion on Malaysia steamrolling over 1,000 Bitcoin miners on the OC3D Forums. 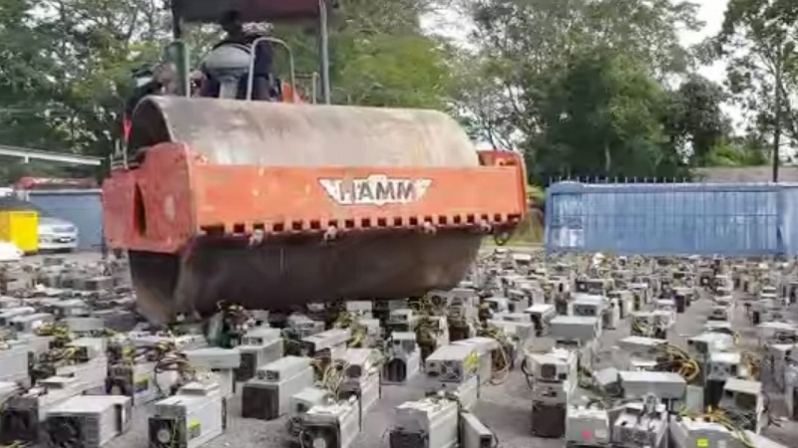 SebastianAltena
You know what I love? destroying limited resources by using limited resources and wasting even more of limited resources to clean up the mess, each one of those things has 1kw psu in it not to mention that asic manufacturers can't get any allocation making prices of miners sky high in this point in time; Good job Malaysians I see you have elected some of the truly brightest people who are indubitably the pride of their hometowns to represent your own impeccable intellect and run your country https://youtu.be/f1N5lZw7e78Quote

ImprovizoR
Yeah, this is a moronic solution to a problem.Quote

Bartacus
Quote:
LOL, I see what you did there.

AngryGoldfish
Quote:
In fairness, the article explains that it may have been the only solution.

"These "PCs" cannot be repurposed as consumer PC and selling them would lead to the creation of new cryptocurrency mining operations.

In this case, the destruction of these ASIC miners was the only viable option for the Malaysian justice system. According to the Miri Police, illegal electricity supply connections have lead to frequent power outages and three home-razing electrical fires in 2021. Currently, the Miri Police are working on new ways to detect illegal electricity connections and cryptocurrency mining operations."Quote
Reply