While the validity of any of these Xbox Series X smoking videos remains unconfirmed, many have pointed out that these effects can be created using an e-cigarettes or vaping equipment, passing smoke through the console to create the "smoking Xbox" effect.

The video below from DANNYonPC, which uses footage from the Xbox Studio Twitter account, showcases how smoking Xbox videos can be faked. That said, some early Xbox Series X units may be defective, as is the case for all newly launched products.

Microsoft's official Xbox Twitter account has since warned users about using vape smoke to recreate this effect on Xbox Series X consoles. In a recent Tweet, Microsoft stated the following "We can't believe we have to say this, but please do not blow vape smoke into your Xbox Series X."

Vape smoke can be comprised of a wide variety of compounds, many of which can be damaging to electronics. To put things simply, blowing vape smoke into any console is a stupid move, as components of that smoke could stick to and damage the system over time.

Even before launch, many conspiracy theories circulated online regarding the Xbox Series X's thermals, thanks to the fact that the system is smaller and more powerful than Sony's PlayStation 5, at least in terms of GPU TFLOPS. These rumours have lead to many speculators calling the Xbox Series X a hotbox, even though the system is cooler running than many high-end PC components. It is rare for a PC's graphics card to catch on fire, so why would a less power-hungry Xbox?

Like all consoles, it is recommended that gamers place their systems within a well-ventilated area. This will allow your system to operate most effectively, and minimise the system's chance of overheating.

You can join the discussion on Microsoft warning Xbox Series X users about "vape smoke" on the OC3D Forums. 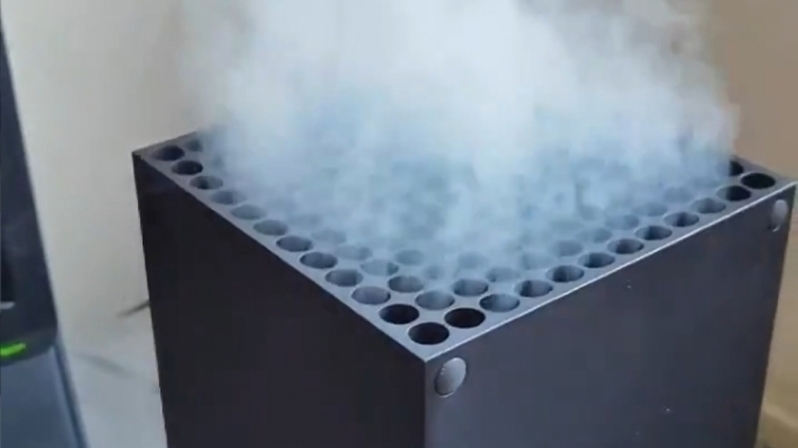 looz
How else am I going to show everyone else that I 1) vape 2) got an early series X?Quote

Warchild
ah I see the stupid populace have got bored again.Quote

AlienALX
I actually used vape to show the air flow on my PCs before. TBH? vape is the same crap they used to do the same thing. They use smoke machines, which is PG. Which is what makes up 30% of vape. The other 70% is VG, which will leave a sticky residue.

It's totally daft to keep doing it though. I also don't like cleaning it off components, so I keep the windows open now when I am vaping.Quote

NeverBackDown
Quote:
Imagine getting bored to ruin your brand new next gen console right away instead of playing it.. the stupid never ceases to surprise everyone.Quote

AlienALX
Quote:
It won't ruin it. It will just leave a greasy film on it if you repeatedly act stupid and do it. Isoprop takes it straight off.

It's dumb though, but then ain't all kids ?Quote
Reply