I know what you are thinking, MSI isn't a brand that you would normally associate with the router market. Perhaps you would think of Netgear, TP-Link, or maybe ASUS, but not MSI.

At CES 2022, MSI has revealed their new RadiX AXE6600 gaming router, which is a CES Awards Honoree. MSI's twitter account today revealed the router to us, but sadly the company has remained tight lipped about its product online. Not the best tactic for those who are advertising their latest wears.

Judging from what we can gather about the router, we know that it features support the "latest and fastest Wi-Fi standards". This means that the router is Wi-Fi 6E compatible. Additionally, we know that the router uses a Qualcomm Quad-core SOC that clocks in a 1.8 GHz. Additionally, MSI plans to avoid overheating with a custom aluminium heatsink and a copper heatpipe, ensuring that this router doesn't get bogged down under heavy networking loads. 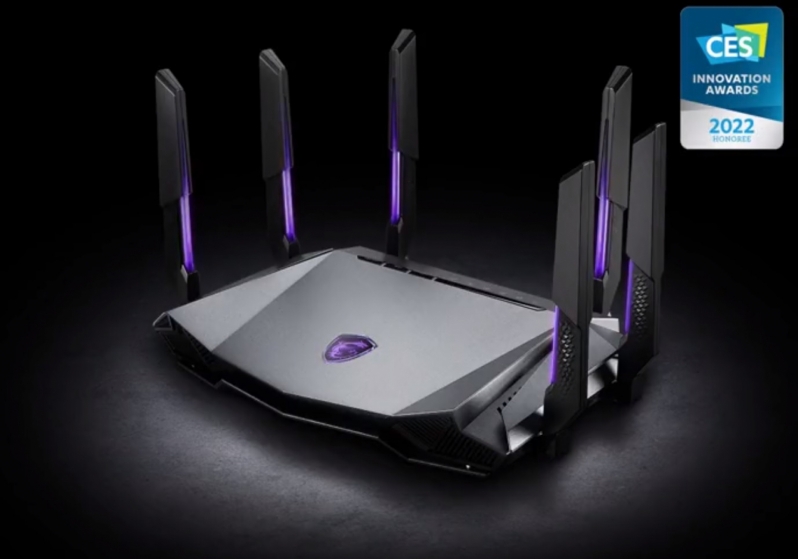 The MSI logo on the RadiX AXE6600 is a button (with unknown features), and it alongside the router's antennas are RGB illuminated. This lighting feature can be controlled by software.

One of the notable features of MSI's router is that it features "integrated AI QoS capabilities, which is designed to "prioritize gaming packets to improve the online gaming experience". Little else is currently known about the router. Below is what is said about MSI's RadiX AXE6600 gaming router on its CES awards page.

The RadiX AXE6600 from MSI lets online gamers dominate any battlefield. This gaming-focused Wi-Fi router supports the latest and fastest Wi-Fi standards to overcome interference and is integrated with AI QoS capabilities that prioritize gaming packets to improve the online gaming experience.

You can join the discussion on MSI's RadiX AXE6600 Wi-Fi 6E Gaming Router on the OC3D Forums.

Dawelio
Damn, this actually looks rather decent, even for being somewhat of an "gamer" router. Even looks better some of ROG's offerings...Quote

Warchild
it just screams Lambourghini. Colour, style, lighting and even the crest shape.Quote