PCI-SIG, the organisation that controls the PCI connectivity standard, has officially published their new PCIe 4.0 standard after a lengthy process of member IP review.

This standard is an important development for PCI, offering 2x the bandwidth of PCIe 3.0 per lane, allowing PCIe 4.0 devices to use half the PCIe lanes and offer the same bandwidth as today's devices or offer two times the connectivity speeds using the same number of lanes. PCIe 4.0 is also designed with several other features in mind, which include reduced system latency and lane margining.

Version 0.9 of the PCIe 4.0 standard was already feature complete, with this version receiving wide levels of adoption before the PCIe 4.0's official publication, which means that vendors are already working on implementing PCIe 4.0 into their future devices.


we’ve seen unprecedented early adoption! Prior to publication, we’ve had numerous vendors confirmed with 16GT/s PHYs in silicon and IP vendors already offering 16GT/s controller. Given the interest, we held a pre-publication Compliance Workshop with preliminary FYI Testing Only for PCIe 4.0 architecture that attracted dozens of solutions. We’re continuing to conduct FYI testing in our workshops throughout the remainder of the year.

PCI-SIG has plans to accelerating the development of their future standards, with plans to finalise PCIe 5.0 in Q2 2019, focusing primarily on pure speed increased rather than other feature updates. PCIe 4.0 will offer 2x the bandwidth of PCIe 3.0 while PCIe 5.0 will offer 4x the bandwidth. Version 0.3 of the PCIe 5.0 standard is already available

Some IP vendors are so eager to adopt PCIe 4.0 that controllers for the standard already exist, albeit using version 0.9 of the standard. 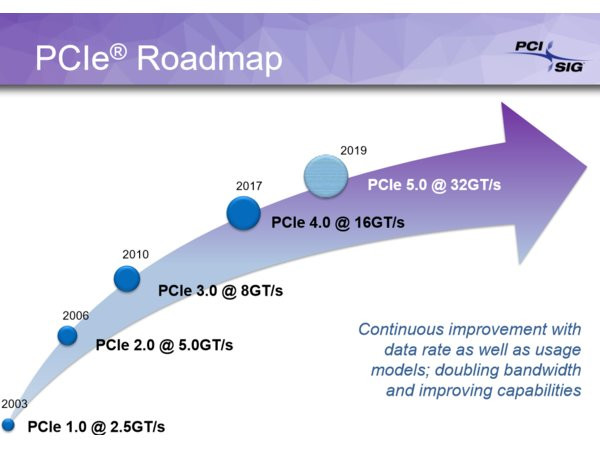 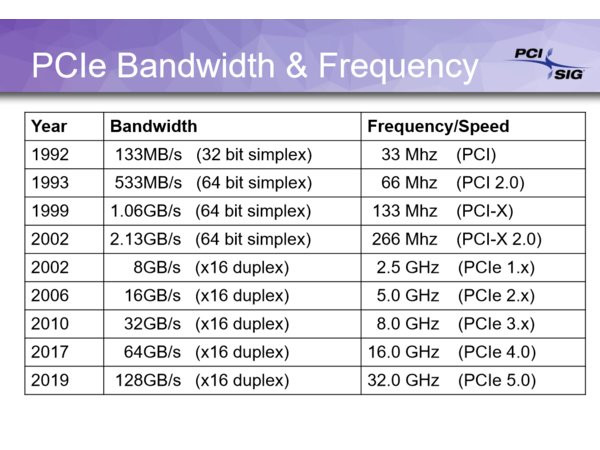 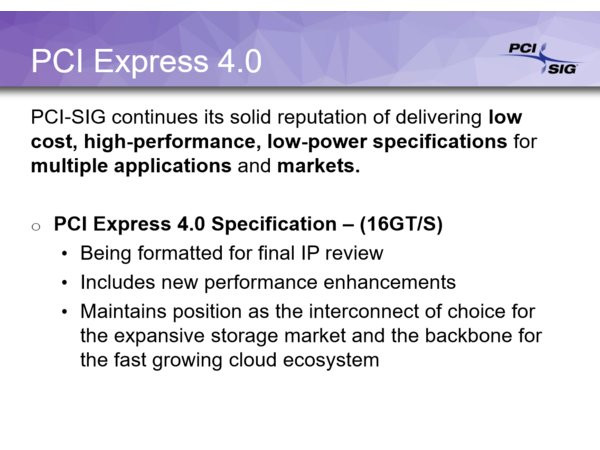 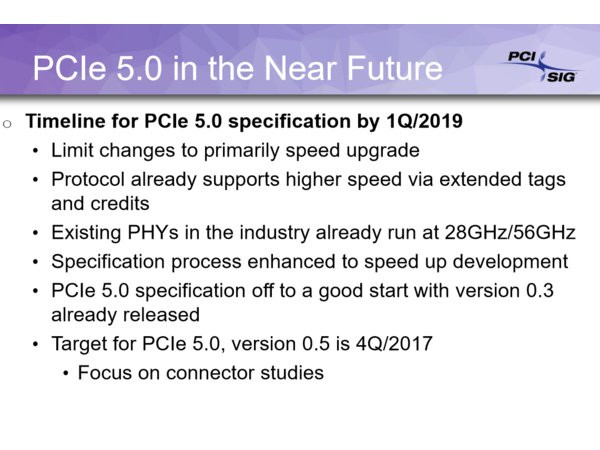 While PCIe 3.0 remains more than adequate for the needs of consumers today, this will likely change in the future as NVMe SSDs, Optane system accelerators or more bandwidth hungry GPUs come to market. At a minimum, it will allow consumers to do what they do today with less memory bandwidth, as PCIe 5.0 4x lanes will offer the same bandwidth as a full PCIe 3.0 16x lane configuration.

You can join the discussion on PCIe 4.0's official publication on the OC3D Forums.

NeverBackDown
Honestly seems like we will skip 4.0 and go straight to 5.Quote

cj09bruno
considering pcie 5 is going to be released in 2019, amd might just skip pcie 4 with ryzen 3 (after ryzen on nm) because that one has a release window of around 2019-2020, unless amd brings pcie 4 while on am4/am4+Quote

The Zealot
Only if Ryzen 2 and Coffee Lake (which is mostly a paper launch at this point in time) don't launch with motherboards ready with PCI-Ex 4.0. There's going to be quite a bit of people where it's just not feasible to wait until 2020 for an upgrade in order to get PCI-Ex 5.0.Quote

Surfie
Quote:
Whilst that is true, as far as it goes, it could be argued that that group of users will (or at least should) update now, and then by the time PCIE 5 rolls around, they will be able to skip PCIE 4 along with the rest of us.

Of course, our supposition also relies on PCIE 5 not being delayed. I personally think this supposition is probably not right - I would expecte 2 years delay minimum. And this is assuming that the company doesn't just decide to hold it up to ensure that the return on investment for PCIE 4 is realised before releasing PCIE 5.Quote
Reply