Phison ushers in the PCIe 5.0 era with their new PS7101 redrivers

Phison ushers in the PCIe 5.0 era with their new PS7101 redrivers

PCIe 4.0 might be all the rage today, but the era of PCIe 5.0 will soon be upon us. The semiconductor industry is calling for faster interconnects and more bandwidth than ever before, acting as the driving force behind the design and adoption of new PCIe standards.

By the end of this year, the PCIe 6.0 standard is due to be ratified, delivering a 4x bandwidth upgrade over PCIe 4.0. The industry is moving quickly, and Phison's ready to step up and push PCIe 5.o to the forefront with their new PS7101 PCIe 5.0 redrivers.

Having system-wise PCIe 5.0 support requires more than just support within CPUs, graphics cards, storage, and other compatible devices. Motherboards also need to support the standard, and signal integrity needs to be maintained to ensure that data feeds remain stable and readable after they are sent. Signal integrity is difficult to maintain between endpoints, and Phison's PS7101 ICs are designed to make PCIe 5.0 compatibility easier to implement.

While Intel's Alder Lake CPU platform will support PCIe 5.0, the main draw of the PCIe 5.0 standard is within the server market, where high-bandwidth connectivity is becoming increasingly important.

PCIe 5.0 will not be a major factor within the consumer market anytime soon; unless software makers give hardware enthusiasts a reason to invest in such a high-bandwidth ecosystem. We will need PCIe 5.0 compatible hardware, and software that can exploit these high-bandwidth interconnect. Unless we have both, there is little reason to look beyond PCIe 4.0, at least within the consumer market.

Below is Phison's press release for their new PS7101 PCIe 5.0 redrivers. 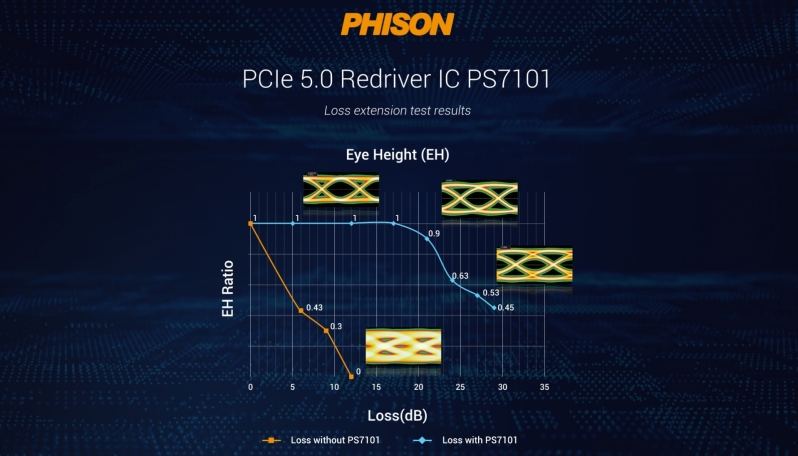 Phison Electronics Corp., a global leader in NAND flash controller integrated circuits and storage solutions, today entered into the high-speed interface IC market with the introduction of its PS7101, a PCIe 5.0 Redriver IC with high gain and high linearity, which solves the signal attenuation caused by the transmission process on the motherboard or riser card in PCs and Servers.

Demand for the PCIe high-speed interface has significantly increased with the continuous development of semiconductor technology. PCIe 5.0 has quadrupled bandwidth over the previous standard in just a few years, with PCIe 6.0 expected to debut soon. Although the higher data rate of the chipset offers convenience to users, the development and design of the entire system has become increasingly more difficult. Specifically, the attenuation and the interference of noise in the motherboard eventually makes the signal between the CPU chip and the endpoints unable to be accurately transmitted and can even cause compatibility problems.

Phison's Redriver IC PS7101 effectively reduces the compatibility problems that may occur when connecting between the CPU and the endpoints. The company's Flip-Chip package design further reduces the signal reflection and crosstalk interference caused by the IC package and improves the ability of heat dissipation. PS7101 provides multi-band independent compensation, which can be easily adapted to different cable or PCB materials, allowing development partners the ability to tune their electrical signals to achieve the best compensation for loss.

As major CPU and motherboard chipset manufacturers continue to push the speed of PCIe to the limit, supporting technologies need to keep up to fulfill the ecosystem. Typically, this is achieved through huge investments and uncertainty in product compatibility. Phison is committed to the research and development of high-speed transmission interface technology used in its broad product portfolio in consumer, enterprise, gaming, automotive and industrial NAND storage products.

After listening to our customers' needs, Phison designed the IC specifications, invested in IC development, completed PS7101 engineering samples, and began production in a record 8 months. The company conducted rigorous tests on ICs to make sure that the features required by each IC meet the requirements of the specifications, and at the same time, ensured compatibility with the complex and diverse environment of transmission between different CPU chips and various PCIe 5.0 devices.

"We are one of the few ASIC companies that has the team and capabilities of developing PCIe 5.0 SerDes PHY IP," said K.S.Pua, chairman and CEO of Phison. "Our high-speed interface engineering team has accumulated many years of experience from the development of IC technology for USB, SATA and UFS interfaces to the successful product launch of the world's first PCIe 4.0 SSD with the PCIe4.0 PHY developed in-house. Furthermore, to improve compatibility, analyze signal and simulate the proposed system, Phison invested heavily in our R&D activities and has established an advanced high-speed signal analysis laboratory. We have done all this to build a solid foundation for Phison to enter the high-speed interface IC market and develop the latest generation of PCIe 5.0 Redriver IC."

Besides being a leading supplier of NAND Flash controller ICs, the introduction of PS7101 is an important step to becoming a technology leader in the high-speed interface IC market. As part of Phison's market strategy, the company is currently developing a PCIe 5.0 Retimer IC to suit different product environments in addition to the PCIe 5.0 Redriver IC. With two high-speed interface IC market products, Phison allows customers to consider both cost and signal optimization as their best choice in the future.

Phison is not only a supplier of PCIe 5.0 Redriver and Retimer IC, but also a partner who strongly supports PCIe 5.0 signal system analysis, simulation and compatibility issues. With a solid development experience, team and equipment in the field of high-speed interface, the company's goal is to provide customers with complete support solutions to solve technical problems encountered in the development process. Phison is also cooperating with major CPU chip manufacturers in the development of new products, making high-speed interface technology more widely used on every platform as CPU chip companies are actively developing their next-generation platforms.

You can join the discussion on Phison's PCIe 5.0 redrivers on the OC3D Forums.