Need insane networking speeds? QNAP may have the solution for you

While 10Gb ethernet is considered excessive by most home users, the same isn't true for the server market. For high-end servers and datacenter setups, bandwidth is everything, and pushing more bandwidth can allow companies to get more work from both their servers and internal networks.

To cater to this market of extreme users, QNAP has launched a new Dual-Port 100GbE networking card that utilises hardware from Nvidia/Mellanox to deliver transfer speeds of up to 200Gbps. That's an insane amount of bandwidth, and more than enough to cater to the needs of almost any user.

With both Windows and Linux drivers, QNAP's dual-100GbE networking card can be used for both servers and workstation PCs, utilising PCIe 4.0 to deliver its full bandwidth on supported systems.

With an asking price of $1,199 US dollars, this networking expansion card is an incredibly expensive solution. That said, this card offers 20x as much bandwidth than a 10GbE expansion card, and they are already pretty pricey. Beow is QNAP's Press Release on their new Dual-Port 100GbE expansion card. 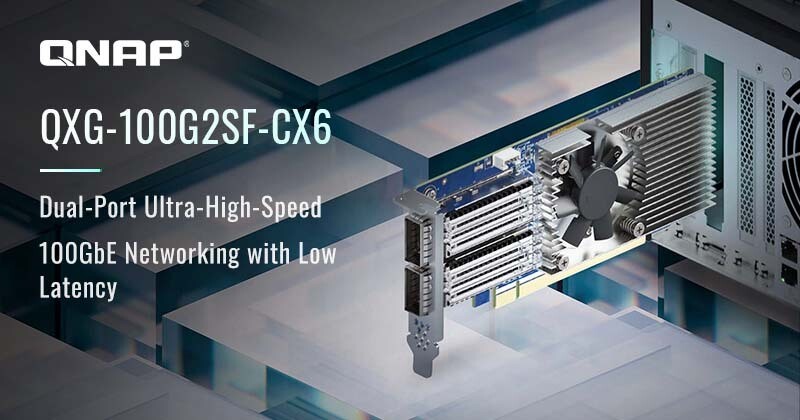 The QXG-100G2SF-CX6 is ideal for unleashing the full potential of QNAP's NVMe all-flash NAS, including the TS-h2490FU, TDS-h2489FU, and TS-h1290FX that feature PCIe Gen 4 slot(s) for industry-leading throughput, low latency, and high message rate. It can be paired with high-speed switches to enable faster data transfer and network efficiency with the unmatched performance of RDMA, RoCE v1/v2, and SR-IOV (1K VFs & 8 PFs). The QXG-100G2SF-CX6 also supports Windows Server (2016 or 2019) and Linux platforms.

The QXG-100G2SF-CX6 network expansion card is available from the QNAP Accessories Store for 1199 USD.

You can join the discussion on QNAP's QXG-100G2SF-CX6 dual-port 100GbE expansion card on the OC3D Forums.