The Raspberry Pi Pico has just got a major upgrade

New product alert! In January last year, we launched the $4 Raspberry Pi Pico, our first product built on silicon designed here at Raspberry Pi. At its heart is the RP2040 microcontroller, built on TSMC's 40 nm low-power process, and incorporating two 133 MHz Arm Cortex-M0+ cores, 264kB of on-chip SRAM, and our unique programmable I/O subsystem. Since launch, we've sold nearly two million Pico boards, and RP2040 has found its way into a huge number of third-party products. We always believed that RP2040 was a great fit for commercial and industrial applications, but the global semiconductor shortage has vastly accelerated adoption. With millions of units on hand today, and pipeline in place for tens of millions more, design engineers who have been let down by their current suppliers have a perfect excuse to experiment.

Fast cores, large memory, and flexible interfacing make RP2040 a natural building block for Internet of Things (IoT) applications. But Pico itself has one obvious missing feature for IoT: a method for connecting to the network. Now, this is about to change. Today, we're launching three new members of the Pico family. Raspberry Pi Pico W is priced at $6, and brings 802.11n wireless networking to the Pico platform, while retaining complete pin compatibility with its older sibling. Pico H ($5) and Pico WH ($7) add pre-populated headers, and our new 3-pin debug connector, to Pico and Pico W respectively. Pico H and Pico W are available today; Pico WH will follow in August.

We've worked with our friends at Infineon to add their CYW43439 wireless chip to Pico W. Like all modern Raspberry Pi boards, the radio circuitry is encapsulated in a metal shield can, reducing compliance costs for customers who want to integrate it into their own products.

Eagle-eyed readers of datasheets will notice that CYW43439 supports both Bluetooth Classic and Bluetooth Low-Energy: we have not enabled Bluetooth on Pico W at launch, but may do so in the future. 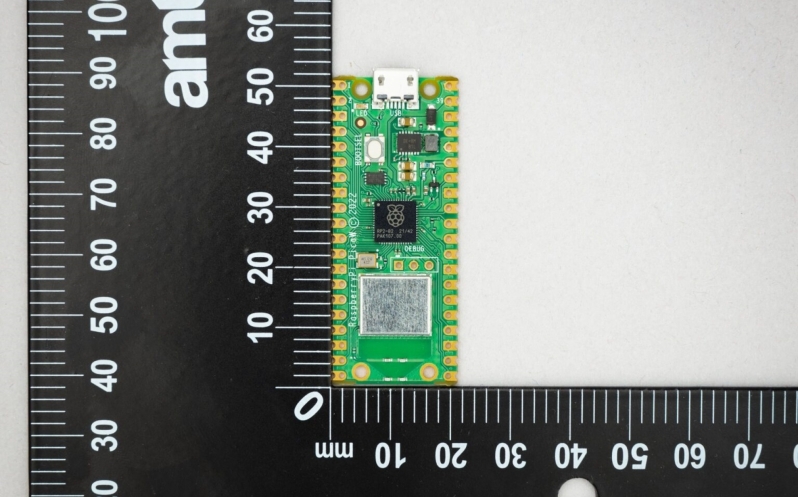 For C developers, today's release of the Pico SDK includes wireless networking support. The network stack is built around lwIP, and uses libcyw43 from Damien George (of MicroPython fame) to communicate with the wireless chip. By default, libcyw43 is licensed for non-commercial use, but Pico W users, and anyone else who builds their product around RP2040 and CYW43439, benefit from a free commercial-use license. MicroPython users can download an updated UF2 image with networking support for Pico W.

This UF2 firmware we're making available for Pico W is a separate build to the existing MicroPython firmware for our original Pico board. We'll be upstreaming the changes to the main MicroPython repository soon after launch, but as MicroPython has separate binaries on a per-board rather than per-architecture basis there will always be two distinct UF2 firmware releases going forward. One for Pico, the other for Pico W. Getting started guides for C and MicroPython, as well as links to API level documentation, to get you online are available in the microcontrollers section of our documentation site. Over the next month or two we'll be rolling out more demos and documentation to help you get the most out of your Pico W.

You can join the discussion on the Raspberry Pi Pico W on the OC3D Forums.