This dock supercharges the connectivity of Thunderbolt 3 PCs

If you've bought a new laptop recently, you are probably aware that manufacturers don't like kitting out their devices with a larger number of powers. DVD drives are absent from most modern laptops, SD card slots are getting rarer and many simply add a few Thunderbolt and USB Type-C ports and call it a day. As such, a device hub or docking station is a must for many of today's PC and Mac users.

Lower capacity models of Sabrent's DS-SKRT-D16TB Thunderbolt 3 16 TB are already available, with 1TB, 2TB, 4TB and 8TB models being available in some regions. This new 16TB model offers insane levels of storage potential to users, with the device offering SSD speeds of up to 1.5 GB/s. This storage comes from Sabrent's two integrated M.2 SSD slots. Sabrent's new DS-SKRT-D16TB offers 16TB of SSD storage though the device's use of two integrated 8TB SSDs.

Below is Sabrent's Press Release for their new 16TB Thunderbolt Dock/Hub.

Sabrent has just released its new DS-SKRT-D16TB Thunderbolt 3 16 TB NVMe SSD Docking Station, which turns your PC into a full-fledged workstation with a considerable amount of power and connectivity for content creators and power users. nside, there's a 16 TB SSD from Sabrent that pushes out up to 1.5 GB/sec (1500 MB/sec) and with its huge amount of connectivity, it's almost like a better-than-NUC-style, well, NUC. You've got 2x Thunderbolt 3 ports with up to 40 Gbps of bandwidth, 2x USB 3.2 Type-A ports, and 1x USB 3.2 Type-C port which both are capable of up to 10 Gbps.

There's also a USB 3.0 Type-A port that's good for up to 5 Gbps, and a BC12 5 [email protected] A charger for your smartphone, tablet, and other devices. Sabrent includes DisplayPort 1.4 connectivity, which is good for up to 8K30 and 5K30 (as well as 4K60 and other lower resolutions). There's HDR, HDCP 2.2, and VESA Adaptive-Sync (FreeSync). 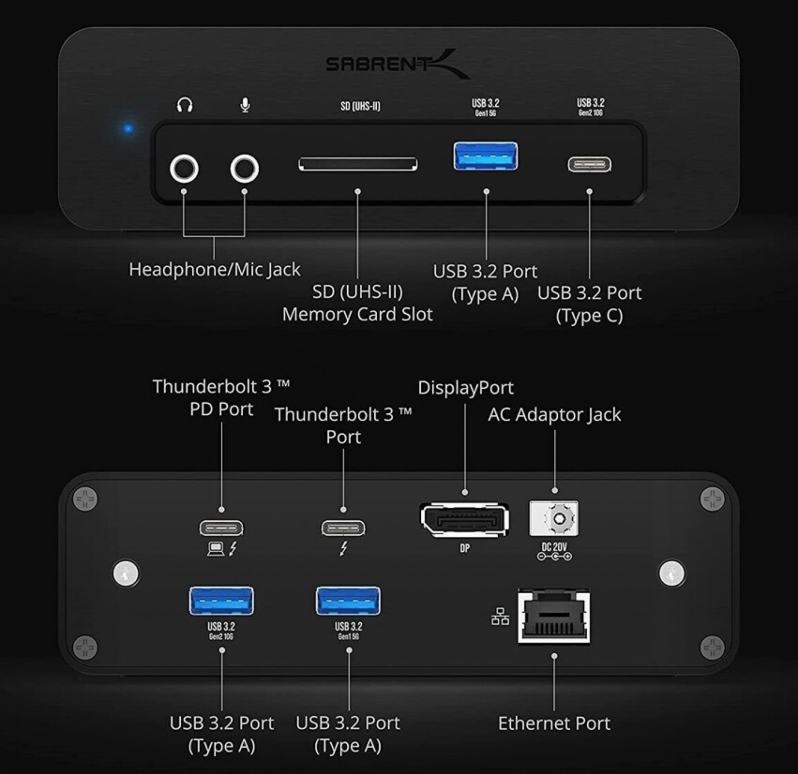 The DS-SKRT-D16TB includes a 1 GbE ethernet port, front access 3.5 mm audio output and microphone input, an SD (UHS-II) card reader with up to 270 MB/sec speeds. The DS-SKRT-D16TB Thunderbolt 3 16 TB NVMe SSD Docking Station is USB Power Delivery (PD) 3.0 and capable of up to 96 W of power.

You can join the discussion on Sabrent's DS-SKRT-D16TB Thunderbolt 3 Dual NVMe SSD docking station on the OC3D Forums.

NeverBackDown
This is honestly brilliant. Cherry on top 96Watt power delivery capable? That's insane. Could charge most laptops with this.

Sabrent release some of the most useful modern tools.

Warchild
Quote:
The benefit of being ahead of the curve is you can charge higher prices while the rest of the world try to keep up with them.Quote