Should TSMC be worried?

By 2030, Samsung plans to become the world's leading producer of semiconductors, overtaking the likes of TSMC and Intel to produce more of the world's high-end silicon than any other company.

To meet this target, Samsung is investing in several new technologies, moving beyond the FinFET structure of most modern transistors towards a new design called GAAFET. This week, Samsung has reportedly confirmed that it has produced its first prototypes using its planned 3nm GAAFET node, a major step towards its eventual mass production.

Samsung, when it initially announced its 3nm GAAFET node, reported that it planned to start mass production in 2021, which is an ambitious target for such an advanced node. If successful, Samsung has an opportunity to take market share from TSMC, assuming that Samsung's technology can provide better performance or density than TSMC's offerings.

Samsung's GAAFET is an evolution of the FinFET structure that's used in most of today's high-end process technologies, providing users with a four-gate structure around the transistor's channels. This is what gives GAAFET its Gate-All-Around name, as the design's 4-gate architecture covers all sides of the channel and reduces power leakage.

To simplify things, surrounding the channel with gates reduces power leakage, which in-turn allows Samsung to control the channels of their transistors better. Lowering power leakage also allows a higher percentage of a transistor's power to be used, increasing power efficiency and performance. Reducing power leakage can also help Samsung miniaturise its process tech. In short, Samsung is betting on GAAFET to push its technology ahead of TSMC.

If 3nm proves successful, Samsung will gain significant power consumption and performance benefits, which will prove useful as the company searches for new customers. 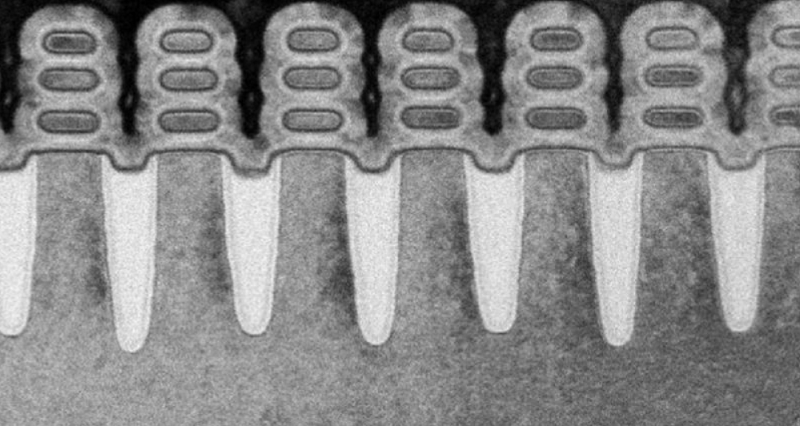 You can join the discussion on Samsung producing its first 3nm GAAFET chips on the OC3D Forums.

NeverBackDown
Few years away so probably not. It'll go into smartphones first anyway most likely.Quote
Reply