Bitcoin is an environmental disaster, and its getting worse

Paper highlights that climate damages caused by Bitcoin, comparing the cryptocurrency to the crude oil

In a study titles "Economic estimation of Bitcoin mining’s climate damages demonstrates closer resemblance to digital crude than digital gold" (read it here), scientists have compared the climate damaged caused by several major industries to the market value of product that is produced by these industries. Effectively, this study compares the economic productivity of industries to the damages caused to the environment that's caused by said industry. For Bitcoin, every dollar of value comes with $0.35 of global environmental damages.

In the paper, Bitcoin was found to be unsustainable for one simple reason. Bitcoin mining was becoming less efficient over time, not more efficient. Most markets become more sustainable as they grow, but the opposite is true for bitcoin. Over the past five years, Bitcoin's emissions per coin have risen from 0.9 tonnes of CO2 per coin in 2016 to 113 tonnes of CO2 per coin in 2021. That's a 126-fold increase. In time, Bitcoin generation will become increasingly inefficient, resulting in more emissions and environmental damage.

Bitcoin is almost as bad for the environment as crude oil

With these figures in mind, it makes sense that Bitcoin has been called "Digital Crude" by the scientists behind this paper, rather than "Digital Gold", a term that Bitcoin investors use to help increase the prestige of their unbacked digital currency. 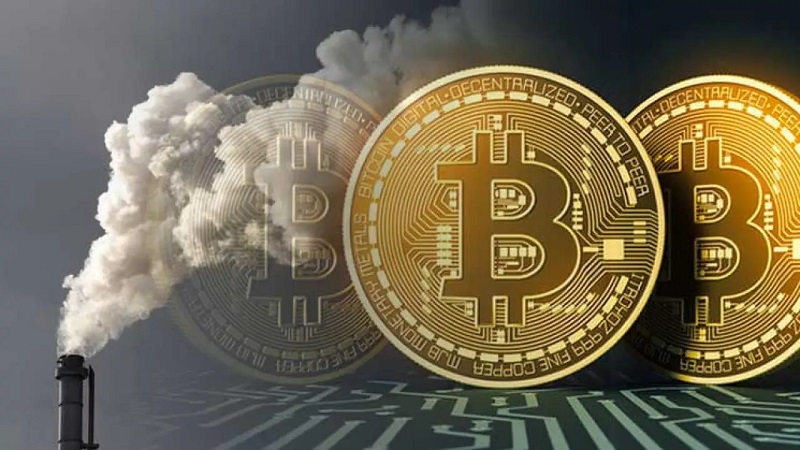 The environmental damage to market value ratio of Bitcoin has varied significantly over the years, with the stated 35% average cited by the paper representing an average for Bitcoin between 2016 and 2021. At times, Bitcoin's damaged to value ratio was as high as 82% in 2020, with freshly mined coins causing an estimated $1.56 of environmental damage for every $1 of their value.

What needs to happen

Within their paper, writers Benjamin A. Jones, Andrew L. Goodkind, and Robert P. Berrens recommended that the crypto industry moved away from inefficient Proof of Work (POW) algorithms and towards a Proof of Stake (POS) structure. Doing so would greatly decrease the environmental cost of cryptocurrencies. Beyond that, increasing global use of renewable electricity will also reduce the environmental costs of cryptocurrency, but the growing inefficiency of Proof of Work (POW) cryptocurrencies makes a shift to renewables an unsustainable path.

Unless cryptocurrencies move to become more environmentally friendly, it is concluded that cryptocurrencies, "then this class of digitally scarce goods", may need to be regulated.

You can join the discussion on Bitcoin's environmental impact on the OC3D Forums.