While mini SEGA emulators are not uncommon, there is a reason why existing Mega Drive/Genesis emulation machines aren't popular. For starters, the emulation is often of low quality, with glitches, inaccuracies and other issues that spoil the classic gaming experience.

With the creation of the NES and SNES Classic Mini consoles, Nintendo proved that their compact devices would offer highly accurate emulation, a reasonable price (if it is in stock) and final images that look great on modern HD televisions.

SEGA has decided to throw their hat into the ring with the SEGA Mega Drive/Genesis Mini consoles, 1upping Nintendo by delivering 40 games with their system and two wired USB controllers for £69.99 in the UK, €79.99 in Europe and $79.99 in the US.

These new SEGA Mini consoles will ship with branding that matches their original consoles for each region. So far, SEGA has confirmed ten of the titles that are included with the console; these titles include; Ecco the Dolphin, Sonic the Hedgehog, Castlevania: Bloodlines, Space Harrier 2, Shining Force, Dr. Robotnik's Mean Bean Machine, ToeJam & Earl, Comix Zone, Altered Beast and Gunstar Heroes. 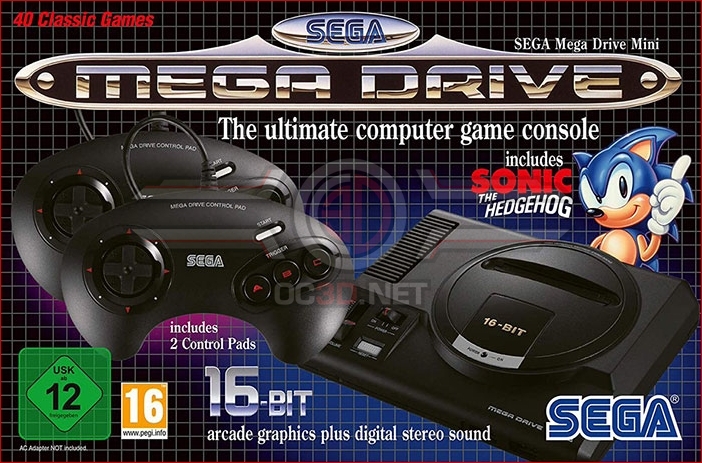 Right now we know that the console ships with two USB controllers, a Micro-USB power input and an HDMI display output. Hopefully, SEGA's mini consoles will offer a high enough level of emulation quality to satisfy both hardcore Genesis/Mega Drive fans and casual gamers alike, an not act as a repeat of Sony's failings with the PlayStation Classic.

You can join the discussion on SEGA's Genesis/Mega Drive Mini consoles on the OC3D Forums.

WYP
Quote:
That Mega Drive is older than I am.Quote

demonking
Quote:
Same, and the cartridges still work, was loving toe jam and Earl and 2 crude dudes the other week

Peace Đ
Quote:
Same here. I loved playing Sonic with my cousin back then. Won't get this though, as I mostly would only for Sonic, which I already have plenty of on Steam and Gamecube.Quote

g0ggles1994
If it has Landstalker then I'm sold. MegaDrive has a lot of gems asides SonicQuote
Reply