The Cryptocurrency market cap has halved within the past month

Over $400 billion in value has been lost

The Cryptocurrency market cap has halved within the past month

On January 8th the total cryptocurrency market cap reached its peak of over $830 billion US, the highest value the digital currency market has ever seen. Since then announcements and rumours of cryptocurrency regulations across the world have dampened the market's enthusiasm over digital currencies like Bitcoin, causing the market to have a general downward trend since that date.

At the time of writing the market cap of the entire cryptocurrency market sits at $372.45 billion, which is less than half of the market's peak less than a month ago, wiping away over $400 billion in market value in less than four weeks.

In recent days South Korea has started regulating Cryptocurrencies, India has threatened to do the same and Facebook has banned as Cryptocurrency related advertisements. This news has caused many investors to sell out, dropping the value of most major cryptocurrencies. Not everything regarding cryptocurrency is negative, with certain currencies like DigixDAO increasing in price by over 50% in the past 24 hours, despite the drop in the total value of the crypto market. 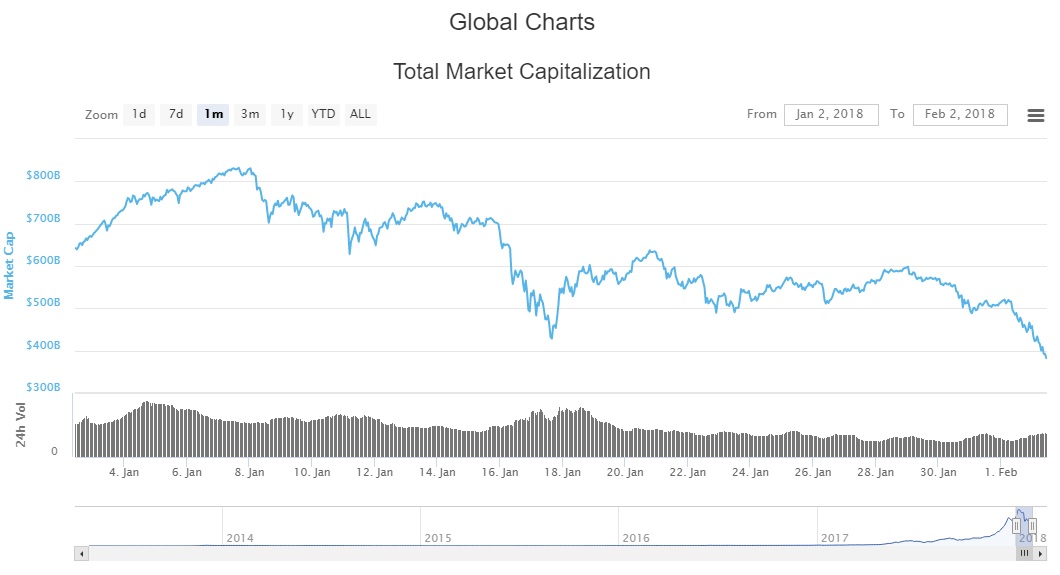 The Cryptomarket remains highly unpredictable, sitting in a wild west scenario where there are limited regulation and plenty of opportunities to lose or win big.

Right now Bitcoin is approaching a value of $8,000, something that hasn't been seen since November, reversing the huge positive trends the currency has seen in December.

You can join the discussion on the Cryptocurrency market cap decreasing in value by over 50% on the OC3D Forums.

A7ibaba
Its time to die this crypto currency bullcrap hype. But unfortunately it wont. As soon there is a way to earn money by doing nothing people got insane.Quote

Piskeante
I hope this major disaster kills the idea of many people to invest large amounts of money that they cannot live without.

You MUST NOT INVEST MONEY that you can't afford losing. This is the rule of the thumb. I've seen people getting credits to buy like 12 GPU's even watching that the cryptomarket is going down quite hard.

There are so many people scared outthere of losing all, that in arround 5 days, the network hashing rato of Ethereum has gone from 170.000 to 197.000 Gh/s. Are people crazy AF??Quote

tolagarf
That's the problem with crypto currencies and mining. People got this notion that it's a get rich quick scheme. It's not, far from it. Only about 10% who invest in crypto doesn't lose money on it, the rest does.Quote