Toshiba plans to increase its supply of 300mm wafers

Toshiba have announced today that they plan to build a new 300-millimetre wafer fabrication facility for power semiconductors that is expected to start producing silicon in the company's 2024 financial year.

When Phase 1 of the site's 2-phase development is complete and enters full production, Toshiba stated that the company's "power semiconductor production capacity will be 2.5 times that of fiscal 2021." Phase 2 of Toshiba's production plan gives the company room to increase their manufacturing capacity further when the market requires it.

What follows is Toshiba's Press Release on their new 300-Millimeter wafer production site. 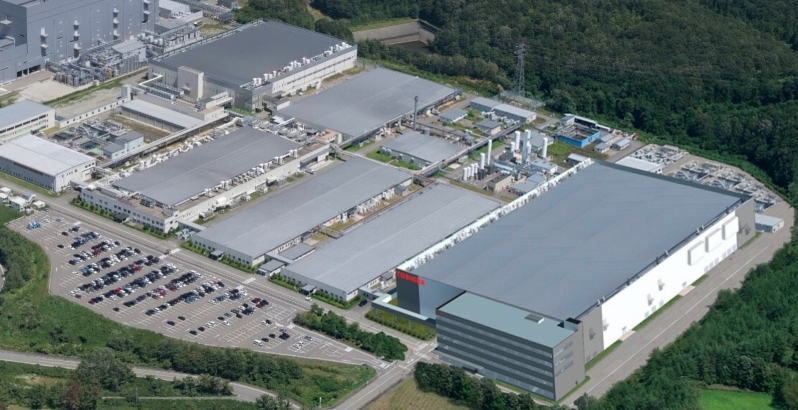 Toshiba Electronic Devices & Storage Corporation ("Toshiba") today announced that it will construct a new 300-milimeter wafer fabrication facility for power semiconductors at its main discrete semiconductor production base, Kaga Toshiba Electronics Corporation, in Ishikawa Prefecture. Construction will take place in two phases, allowing the pace of investment to be optimized against market trends, with the production start of Phase 1 scheduled for within fiscal 2024. When Phase 1 reaches full capacity, Toshiba's power semiconductor production capacity will be 2.5 times that of fiscal 2021.

Power devices are essential components for managing and reducing power consumption in every kind of electronic equipment, and for achieving a carbon neutral society. Current demand is expanding on vehicle electrification and the automation of industrial equipment, with very strong demand for low-voltage MOSFETs (metal oxide semiconductor field effect transistors) and IGBTs (insulated-gate bipolar transistors) and other devices. To date, Toshiba has met this demand growth by increasing production capacity on 200-milimeter lines, and expediting the start of production on 300-milimeter production lines from the first half of fiscal 2023 to the second half of fiscal 2022. Decisions on the new fab's overall capacity and equipment investment, the start of production, production capacity and production plan will reflect market trends.

The new fab will have a quake absorbing structure; enhanced BCP systems, including dual power supply lines; and the latest energy saving manufacturing equipment to reduce environmental burdens. It will also aim to achieve the "RE100" goal of 100% reliance on renewable energy. Product quality and production efficiency will be improved by introducing artificial intelligence and automated wafer transportation systems.

Going forward, Toshiba will expand its power semiconductor business and boost competitiveness by timely investments and research and development that will allow it to respond to fast growing demand, and to contribute to a low-energy society and carbon neutrality.

You can join the discussion on Toshiba increasing its Power Semiconductor Production Capacity on the OC3D Forums.