WightFibre's broadband network is now full-fibre, allowing the company to switch off its legacy network

The Isle of Wight now boasts some of the fastest internet in the UK, with WightFibre leading the charge with its new all-fibre network and its £94 million "Gigabit Island Project", which aims to be connected 96% of all premises on the Island by the end of 2023.

While WightFibre's focus is on full-fibre broadband, the operator was connected to a number of premises using an older Hybrid Fibre Coax (HFC) network. Was? Yes, now these legacy connections have all moved to Full-Fibre connections, allowing WightFibre to become the first network operator in the UK to switch off their legacy copper network. WightFibre now has a full-fibre network.

Below is what WightFibre's CEO, John Irvine, had to sayo about the company's full-fibre transition.

Our big copper switch-off was a major undertaking. For most customers the migration to full-fibre was seamless – their existing phones and analogue devices are supported on the new network with the notable exception of rotary dial telephones – thankfully there were only a few of those.

A small number of customers with very old alarm systems did need to upgrade their alarm systems as these are incompatible with full-fibre. With business customers this extended to some older dial-up credit card machines and fax machines. In many case WightFibre helped with these changes to persuade customers to upgrade.

Overall the process ran fairly smoothly. Our customers love the new network, the faster speeds, and the much-improved reliability. 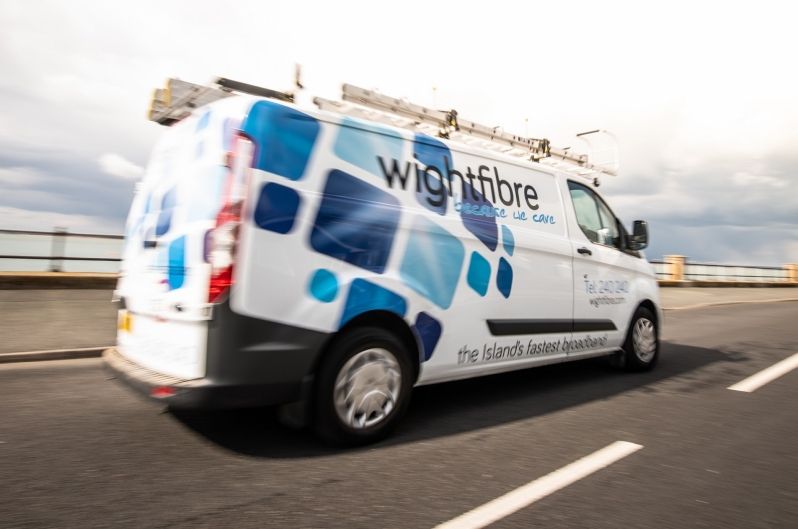 WightFibre is ahead of the whole UK

WightFibre has turned off its legacy copper network more than a decade ahead of its mainland UK rivals. BT Openreach currently plans to switch off its copper network in the mid 2030s, and even then many remote areas will not be ready in time.

Virgin Media plans to fully upgrade from their HFC network to full fibre by 2028, though it remains unclear how long it will take for Virgin Media to transition their customers away from their legacy connections when their network has been upgraded. Even then, WightFibre will have beaten them to the punch by more than five years.

Today, the Isle of Wight has one of the strongest telecommunications networks in the UK, allowing the small Island to punch well above its weight class in today's connected world. With a full fibre network, WightFibre may become one of the first ISPs to push beyond 1Gb connections speeds to homes, making the Island a hot spot for networking fanatics.

You can join the discussion on WightFibre turning off their legacy copper network on the OC3D Forums.

Warchild
Its shocking how UK is so far behind when it comes to broadband.Quote

Dicehunter
Quote:
The UK is many decades behind the rest of Europe in dozens of ways, The problem is the UK is run by a "class" of people who have no idea of real life, They are born into rich families and those same families have been in various positions of power for the last 1000 years making sure the common person never gets too far in life.

All services have been sold off to foreign countries to put money in the back pockets of "the old boys" and general quality of life here is absolutely terrible compared to on the continent.

I'm genuinely amazed the UK hasn't received 3rd world status due to the constant strip mining of commodities, Health services, Services in general and then the low quality of anything that's left.

The UK needs a massive shakeup.Quote

demonking
I spoke with a bt engineer on this very subject a few years ago and I was told that they can't at the moment. Reason being is emergency calls in case of power outage. As you know, you can plug a corded phone directly into the phone socket and its powered by the line alone. This would not be the case for fibre and would put people at risk in the case of power failure.

I do agree though, wtf this country does not have fttp fully rolled out at this point is a case of greed. They're rolling it as quickly as they whilst maintaining the best possible share holder payouts, same as the the other utilities. This is why it should never have been privatised, same as the leaks in the water system (over 3 billion litres a day leaked, hence the restrictions) and the gas, as we're exporting most of what comes out of the North Sea as there's no storage for it here in the UK, even though the volume we take out in the North Sea would cover 80% of the uks usage. Same with electricity, they could have built more solar farms, nuclear power plants and wind turbines but again, making sure the shareholders got a good payout was the priority. And wheres the taxes? In some tax haven. I hate the greedy world we're living in, I fully see some kind of elysium style future for us and it's vileQuote

Dicehunter
Quote:
I've lived and worked in multiple EU countries, All of which have country-owned utilities, All fair prices, No shareholder fat old men to please. When I came back to England I was truly disgusted as to how much we pay for how little we get and for how low quality it is.

In the UK we don't pay for what we use otherwise we'd be paying 1/10 of what we do now, We're paying for the shareholders and all out greed which I think is disgusting.

I genuinely think at this point nothing short of a full blown revolution followed by life imprisonment for ALL politicians will sort the UK out, Leadership from both left and right has proven to be immensely corrupt.Quote

It's a difficult task to achieve.

I wish it was as simple as what has already been commented but it's not.

You can blame Council's and BT for it, if it were not for them then FTTP would be a lot closer.Quote
Reply