Would you kindly watch this? Netflix is turning Bioshock into a live-action film

Netflix is now working on a Bioshock movie

Netflix has revealed that they have partnered with 2K and Take-Two Interactive to create a film adaptation of BIOSHOCK, the critically acclaimed first-person shooter role playing game.

Currently, the planned movie has no confirmed writer or director, though Vertigo Entertainment has been listed alongside Take-Two Interactive as producers. The film will reportedly be a live action adaptation of the video game franchise, though information beyond that remains hazy.

Bioshock was released in 2007 and introduced players to the decaying underwater city of Rapture, a fallen underwater metropolis whose inhabitants are addicted to a serum that can give users various abilities. With 2013's Bioshock Infinite, players were introduced to the floating city of Columbia, with the game's finale introducing to the series a multiverse of infinite lighthouses that lead to dystopian cities. This ending alone leaves room for a cinematic universe of Bioshock content.

Right now, Netflix has set to release timeframe for their Bioshock movie adaptation. This means that the project will likely take years to reach completion. Currently, a new Bioshock game is reportedly in the works from Cloud Chamber, though little is known about this upcoming title.

You can join the discussion on Netflix' planned Bioshock film adaptation on the OC3D Forums. 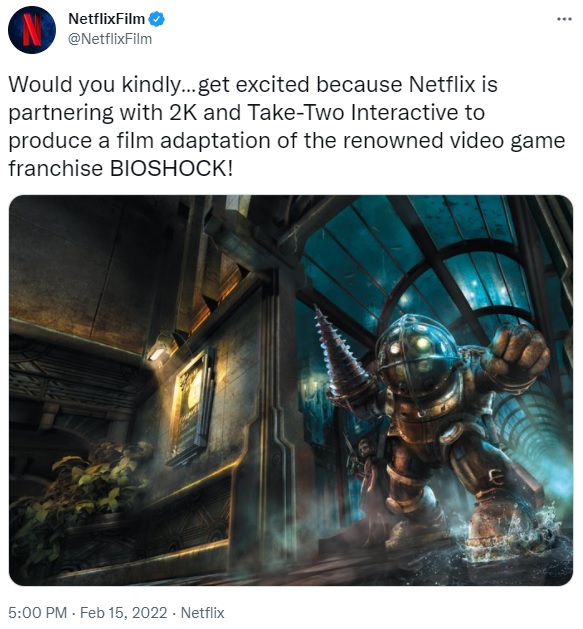 AngryGoldfish
I don't trust Netflix with this.

But at least it'll be 'free'.Quote

Warchild
Quote:
Until you see Netflix monthly fee go up yet again.Quote

AngryGoldfish
Quote:
That's what I meant by the 'free' bit. I should have used quotation marks, sorry.

Deadtroopers
Yawn. Not only have they missed the boat but it sank some time ago. Even if it were relevant it'd be rubbish, both because of the source and who is executing it. Can we leave games were they belong, please?Quote
Reply