Over the past few years, PCs have become increasingly efficient whether it be to new GPU architectures in improvements in silicon manufacturing with process node shrinks and other advances like FinFET transistor designs.
Even so, there are still PCs that consume large amounts of power, especially those that use multiple overclocked high-end GPUs and CPUs. These new PSUs should be able to easily run overclocked high-core count Intel X299 and AMD X399 systems with multiple GPUs.
These new PSUs will come in 1100W, 1300W and 1500W variants, all of which feature modular cabling and a single +12V rail design. Silverstone's new ST series PSUs will come with a maximum of eight 6+2 pin PCIe power connections, sixteen SATA power connections, six 4-pin Moles connections and two 8-pin (4+4 pin) EPS connections as well as a standard 24-pin motherboard connector.
All of these new PSUs come in an 180mm length ATX form factor, which is very small for 1000W PSUs, with all of these PSUs also coming with 135mm fans for cooling, which can run in a passive state under certain loads. 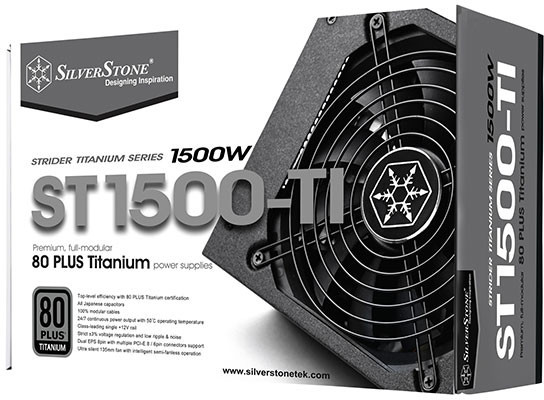 Silverstone has not revealed the pricing of these new PSUs, or when they are expected to arrive at retailers.

You can join the discussion on Silverstone's Strider series of 1100W+ CPUs on the OC3D Forums.