2020's PC Gaming Show has been delayed until June 13th

Expect to watch the PC Gaming Show next weekend

2020's PC Gaming Show has been delayed until June 13th

PC Gamer has announced that 2020's PC Gaming Show has been delayed until June 13th, one week after the event's original air date, following the footsteps of EA, Sony, CD Projekt Red, and IGN, who have all delayed their E3 2020 replacement events.

When discussing the change, PC Gamers has delivered a similar answer to their peers, citing the Black Lives Matter and anti Police brutality protests which are currently taking place across the USA.

Like you, we have found it hard over the last week to focus on anything other than the demands for justice and the justifiable anger that millions of Americans are expressing. Right now, we want to make space for those speaking out and demonstrating about how to end the systemic oppression and police brutality experienced by black people.

In support of that movement, we are postponing the broadcast of this year's PC Gaming Show by a week to Saturday, June 13. This year's event represents the collective work of hundreds of passionate, committed, supremely talented developers whose vision we're excited to help share.

To learn more about the Black Lives Matter movement, read our post from earlier this week that includes links to reading materials, where you can donate, and resources for learning how to protest safely.

The USA's ongoing Black Live Matter and anti Police brutality protests that are taking place across the United States. These protests were sparked after the death of George Floyd, who was needlessly killed by a police officer in Minneapolis. This event was recorded by passers-by, who were concerned about what they had witnessed. This event was one of many, and now the voices of American minorities are demanding to be heard.

More information about George Floyd's death and the US' mass protests is available via the BBC.

Sony has already delayed its "The Future of Gaming" PlayStation 5 reveal event due to the protests, and CD Projekt Red has made a similar move by shifting its "Night City Wire" live stream from June 11th to June 25th. This event was due to showcase new Cyberpunk 2077 gameplay. IGN has also delayed its "Summer of Gaming" event to June 8th, though it is possible that some of these events may be delayed again, as protests are still ongoing.

This year's PC Gaming Show will feature gaming showcases from over 30 different presenters, which range from interdependent creators to hardware manufacturers and AAA developers. PC Gamers can expect never-before-seen gameplay footage, new announcements and news from some of PC Gaming's most interesting developers. 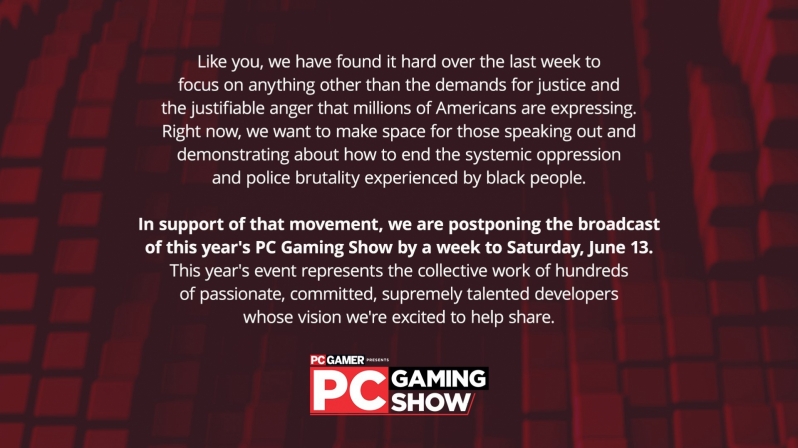 You can join the discussion on PC Gamer delaying its PC Gaming Show Live event on the OC3D Forums.