Disk-based games are safe, right? Surely they are not at risk of server shutdowns, rendering them unplayable or otherwise hampering my ability to play my legitimately purchased copy? Well, no. Borderlands disk-based version and its use of SecuROM has made physical editions of the game playable.

Two days ago, on March 27th, 2K Games removed their "Borderlands Granting Tool" from Steam, preventing legitimate owners of Borderlands from converting their unplayable physical copies into playable Steam versions. If you didn't redeem your Steam copy of Borderlands on Steam before March 27th, you are stuck with your unplayable disk version.

Yesterday, Gearbox and 2K announced that owners of the Steam-based version of Borderlands would get a free upgrade to the title's Game of the Year Edition on April 3rd, granting them access to free DLC for the game alongside other new features (more information here). This announcement came one day after the "Borderlands Granting Tool" was removed from Steam, leaving us to conclude that Gearbox and 2K are wilfully denying owners disk-based copies of Borderlands access to the title's "Game of the Year Edition".

The dates of this announcement and the removal of the Borderlands Granting Tool are too close to be called a mere coincidence. What Gearbox and 2K have done is deny disk-based owners of Borderlands access to their game, not just their free Game of the Year Edition upgrade. Owners of the disk-based version of Borderlands must now repurchase the game to access it, which is not a consumer-friendly move from Gearbox/2K. 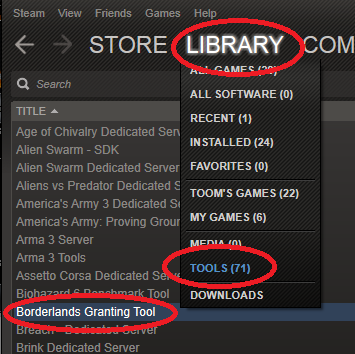 You can join the discussion on 2K stopping disk-to-Steam Borderlands conversions 1 day before their Game of the Year Upgrade announcement on the OC3D Forums.

Peace Đ
Not sure why they would do that... After the teaser and trailer seem to have gained a lot of positive feedback, these are pretty bad news.

Lazlo
Maybe there is a new tool on the way or they will make the keys of the Disc Versions redeemable on Steam. Otherwise this would be a kind of sh*ty move.Quote
Reply