Need to reuse an old CPU cooler? 3D Printing could be the answer

Long-time PC gamers will know how this feels. You're upgrading your PC, and you want to reuse as many components as you can. You don't want to buy everything fresh, and the money you could save keeping your old heatsink could help you buy a higher-end graphics card, a better motherboard or a larger SSD.

On Thingiverse, a user called xaviervilla wanted to reuse an AMD clip-based heatsink on an Intel LGA 1150 motherboard, moving the cooler from the AMD's AM3 platform to Intel's Haswell-series of LGA 1150 CPUs. To do this, xaviervilla created a custom AM3/AM3+ to LGA 1150 heatsink adapter kit, which was then printed using ABS and used to mount a Cooler Master Hyper 212 cooler to a previously incompatible socket.

With LGA 1200 and LGA 1151 sockets featuring the same mounting holes as LGA 1150, and AMD's AM4 socket using the same clip-on mechanism as AM3/AM3+, this solution has the potential to be used on modern Intel CPU sockets to offer cross-compatibility with clip-on AMD-compatible heatsinks. This is a great example of how 3D printing can allow old hardware to be recycled into newer systems.

xaviervilla recommends that users of his design print using ABS due to its heat-resistance properties, or PETG for the same reason. PLA is an incredibly popular filament type for FDM 3D printers, but it is prone to warping when heated, making the material far from ideal for a heatsink mounting solution. At this time, we have not tested how widely compatible this solution is with clip-on AMD-compatible coolers. However, we think it would be awesome to see a version of this design make Intel motherboards compatible with AMD's Wraith Prism CPU cooler. 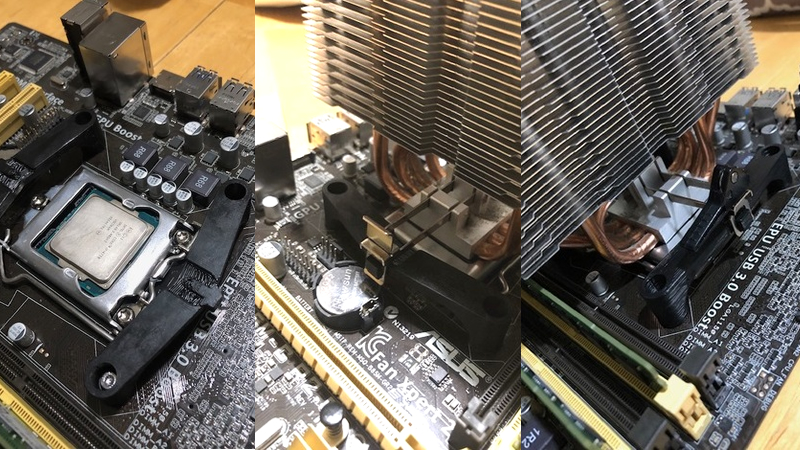 You can join the discussion on 3D printers making Intel motherboards compatible with AMD clip-on CPU coolers on the OC3D Forums.

Avet
I don't know why would anyone need such a thing but it is nice to see clever ideas. It is not a complicated design where a 3D printer would have an advantage. CNC would probably do it much faster. I don't know about the cost.Quote

Warchild
Quote:
I thought the same. Great ingenuity but not really necessary unless you swapped from AMD to Intel and lacked the mount/coolerQuote

looz
The more I hear about this 3D printer guy the more I like him.Quote
Reply