Asobo Studio have revealed A Plague Tale: Requiem's PC system requirements, confirming that PC gamers will need ultra-high-end gaming systems to run the game maxed out at resolutions above 1080p.

A Plague Tale: Requiem is the sequel to Asobo's A Plague Tale: Innocence, following the lives of Amicia and Hugo after they escaped from their homeland in the prior game. When Hugo's powers reawaken, the duo are forced to flee once again once death, destruction, and bloodthirsty rats come to their doorstep.

On PC, A Plague Tale: Requiem will support Nvidia's DLSS 2 and DLSS 3 technologies on day-1, giving Geforce RTX users a way to lower the game's high GPU requirements. Even so, Nvidia's RTX 3070 is recommended for 1080p 60 FPS gameplay at Ultra settings.

Like many modern PC games, A Plague Tale: Requiem has SSD storage as a recommendation. While slower HDDs will run the game, using slow drives like these will result in long loading times and a less seamless gameplay experience. 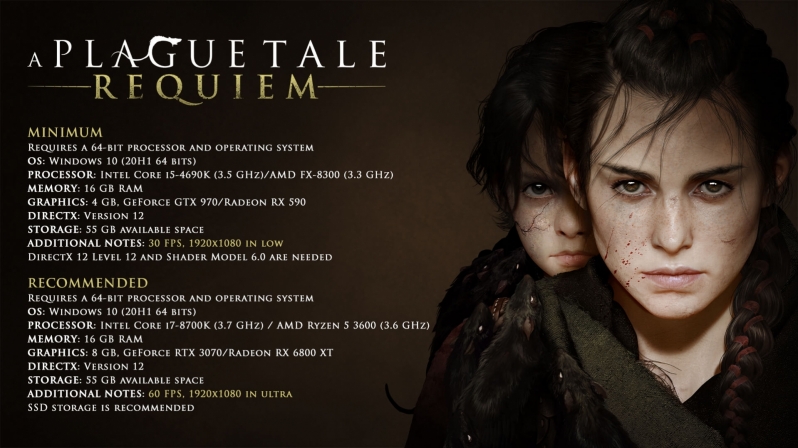 With Nvidia's RTX 3070 and AMD's RX 6800 XT being the game's recommended graphics cards for 1080p Ultra gameplay, we expect A Plague Tale: Requiem to be an incredibly demanding game on PC. That said, resolution upscaling technologies, and lowered graphical settings should make the game more playable on more modest PC hardware configurations.

A Plague Tale: Requiem will be available on PC through Steam on October 18th.

You can join the discussion on A Plague Tale Requiem's PC system requirements on the OC3D Forums.