AMD users have been left behind by Adobe's 22.2 update

Below, we can see video export times that are cut down to insane degrees on Nvidia hardware, with all the tests below seeing encoding rates that are at least 4x faster. These tests used the same files and hardware to compare Adobe Premiere Pro's 22.1.1 and 22.2 versions. 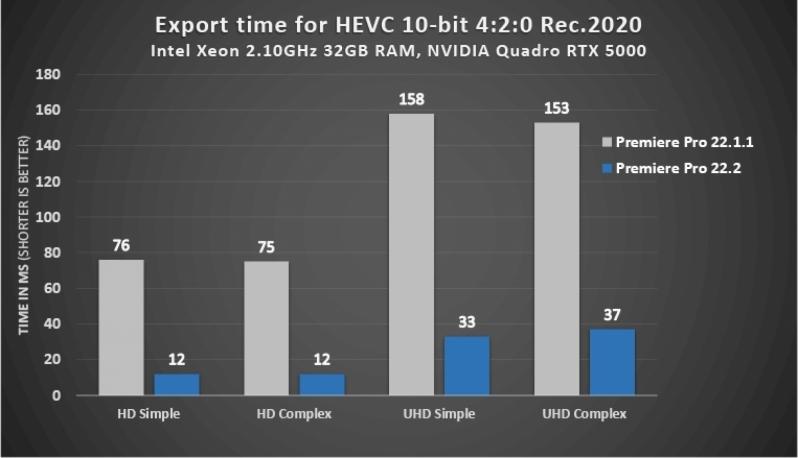 The example below showcases the faster encoding speeds that can now be delivered with Intel's Xe Iris Pro integrated graphics, showcasing a performance increase of 10x in some cases. This is a great showing for Intel's hardware, especially now that Intel plans to enter the discrete GPU market.

Intel's graphics chips are targeted at gamers and creators, and that factor alone sets up Intel for success. A lot of workstation workloads can be accelerated by GPUs, and if Intel's new ARC Alchemist graphics cards impress this market, Intel should be able to make a lot of money powering all-Intel workstation notebooks and PC.

While Nvidia has been increasing its focus on creatives in recent years, with their Geforce Studio drivers being an example of this, the company has thus far lacked a competitor within this market. AMD's Radeon lineup has so far failed to impress creatives, especially those within video editing circles. With their ARC Alchemist line, Intel aims to deliver real competition within this space. 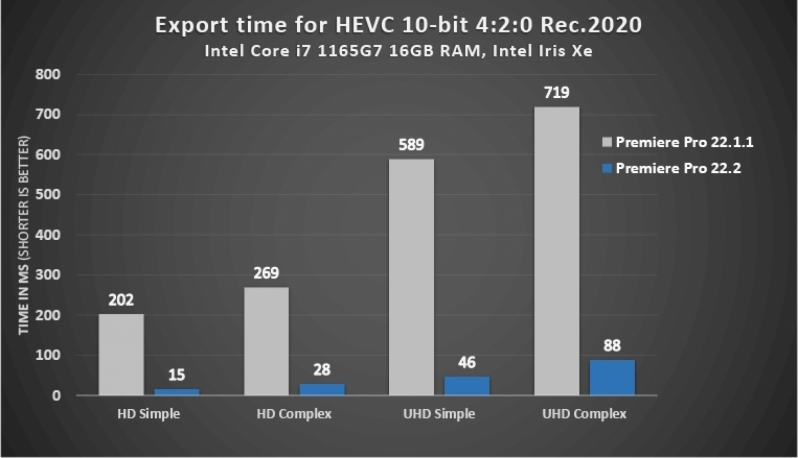 Sadly, AMD graphics card users do not benefit from this new Premiere Pro update, highlighting a shortcoming in AMD's product stack. The "Creator" market is an area where AMD is currently weak, and the compony needs to put in more effort to compete with both Intel and AMD in this market. Right now, it is hard to recommend AMD graphics card to video editors. Premiere Pro's 22.2 update and its lack of focus on AMD products has further highlighted this.

Does AMD have an answer to Nvidia's creator-focused Studio drivers? No. Was AMD's Premiere Pro performance already behind Nvidia's before this update? According to Puget Systems, yes. Intel already has strong GPU support in the workstation space with its integrated graphics chips, and Nvidia has already cornered the discrete GPU market for PC users do more than just gaming. AMD needs to work on enhancing its Radeon products for creators, especially when it comes to video encoding/decoding. Such changes would be valuable for AMD for both their discrete GPUs and integrated GPUs.

You can join the discussion on Adobe's Premiere Pro 22.2 update on the OC3D Forums.